AYUTTHAYA: Four Japanese tourists and a Thai tour guide were killed instantly when their van hit the rear of a ten-wheeled truck in Bang Pa-in district on Wednesday afternoon.

Police were informed of the accident at about 4.30pm. They found the wrecked white van on Highway 347 in tambon Talad Kriab. Its front was heavily damaged, and the vehicle was on fire. Rescue workers were hosing down the van while trying to rescue its occupants.

Van driver Charun Aksonsri, 52, was seriously injured and suffered burns. He was sent to Bang Pa-in Hospital before being transferred to Pranakorn Sri Ayutthaya Hospital.

Rescue workers then found five bodies. One was the badly burned corpse of a female Thai tour guide identified as Piyatip Krueangtai. The other four were Japanese tourists, two male and two female.

Truck driver Weerachai Rueangsri, 22, said he was slowing down his vehicle in the left lane to turn into a soil excavation site when he heard a loud noise from the back of the truck.

Police found that the van was carrying two natural gas cylinders. Police were questioning witnesses to help determine the cause of the accident. 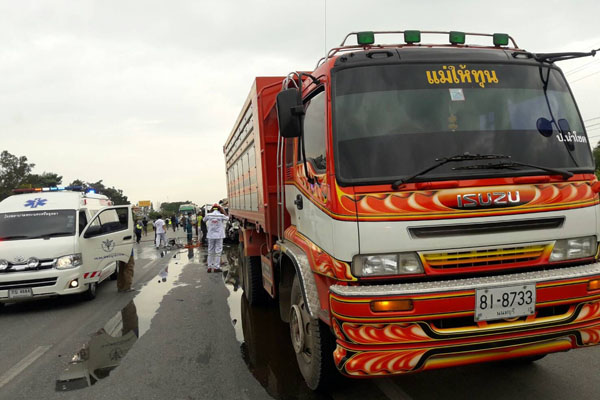 Twenty-two charitable foundations have launched an auction for 22 Royal Limited Edition Leica cameras, M10-P, to help those in need.