Former grand chamberlain Distorn Vajarodaya will face further criminal charges after he was dismissed by the Royal Household Bureau for disciplinary violations and "severely immoral acts", a police source says.

Mr Distorn will face legal action for breaking the law, said the source from the Central Investigation Bureau (CIB).

The Royal Household Bureau is expected to lodge a formal complaint against Mr Distorn when it finishes compiling evidence to support the complaint, according to the CIB source.

Mr Distorn was removed as grand chamberlain and appointed Special Grade attached to the Royal Household Bureau on Nov 15 last year. The appointment was published in the Royal Gazette on Jan 22.

In an order dated Nov 6 and signed by Lord Chamberlain Chirayu Isarankura Na Ayudhya, the Royal Household Bureau said Mr Distorn, also chairman of the Rajaprajanugroh Foundation under royal patronage, committed four serious wrongdoings that cost him his job, which was serving the royal family.

As the chairman of the foundation, Mr Distorn abused his power by instructing a foundation official to issue a document certifying the donation of 25 million baht by a person, even though the donation did not occur.

Mr Distorn later used the certificate to ask for a royal decoration for that person.

He was also found taking soil left over from the construction of the new and under-construction parliament for sale to a land developer and for use as landfill at his own place, even though the Lower House gave the soil to the foundation for its own use.

According to the bureau, the former grand chamberlain also used a royal car that was involved in an accident. He then made a "false claim of the monarch's signature" to import a car without paying tax in order to replace the damaged vehicle.

All of this was done without royal consent, the announcement said. 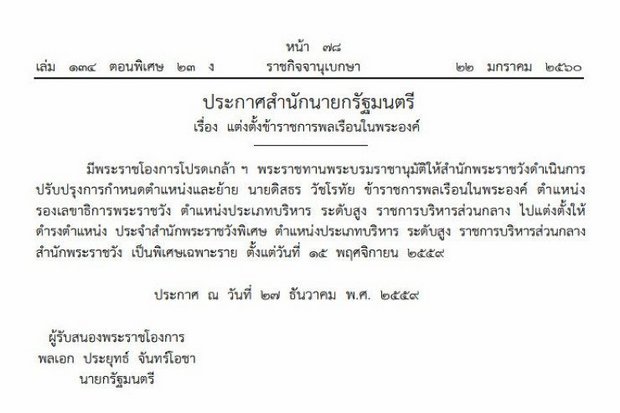 Mr Distorn was intimate with a woman whom he got pregnant on two occasions. He forced her to abort once but the second time she resisted.

As a result, he forced her to marry another man, according to the bureau.

In light of his conduct, the bureau decided to exercise its power under the 2017 act and royal decree on royal service administration to dismiss Mr Distorn from his post.

The order took effect on Monday.

Sorasak Pienvej, secretary-general of the House of Representatives, said the House secretariat office would not file a complaint against Mr Distorn.

It has, however, filed a complaint with the Crime Suppression Division against those who were allegedly involved in misconduct concerning the 12-billion-baht new parliament complex construction.

Mr Sorasak said to his knowledge Mr Distorn does not feature on that list.

He said the police will decide what action to take in that case based on the evidence they compile and that his committee has completed its investigation into the construction case.

A number of factors delayed the project. Chief among these are problems in removing 1 million cubic metres of soil that was dug out to clear space for the main building, including its two underground levels.

The House secretariat office encountered a problem when it decided to donate half of the excavated soil to the Rajaprajanugroh Foundation.

The office later found a representative of the foundation planned to use it for other purposes. As a result, it had to cancel handing over the soil to the foundation, causing further delays.