Of course, it has been coming for a while. We only know that by looking back and wondering, "Wait. What happened to that guy fulminating at questions?"

Suddenly, on Tuesday, it was a square dance and the caller ordered, "Do-si-do and change partners." 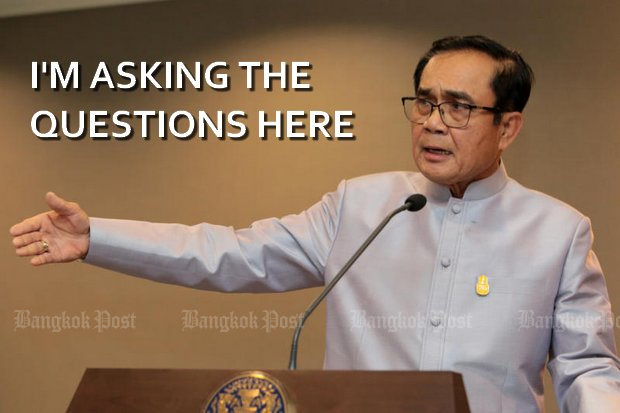 In charge: Prayut at Government House. (Photo by Chanat Katanyu)

"I have six questions," Gen Prayut said to the media, who were waiting to ask their own. Then the general prime minister asked seven questions, which have fascinated the media every day since then but which seemed to us excessively verbose.

It's probably just the subeditor in us, but we thought we could get the same message across in better than seven questions in six parts. We wound up with a single question: "Is everybody all right with my staying around as leader indefinitely to keep politicians in their proper place, by which I mean under our boots?"

And the spotlight would be better focused on an actual single query made a day earlier. Reporters trying to wheedle information on how many green shirts will lose their jobs in the upcoming cabinet shuffle got a question back to their questions. "Why do some people dislike soldiers?"

Of course they don't, but lots of people hate a military regime and often describe it with a 12-letter word beginning with "D".

So we also get to ask a question, right? Here's our question: What's the last time you heard the word sanook?

But it wasn't just the dear leader who changed. On Thursday Somkid Jatusripitak, appointed in 2001 as Thailand's first true economy tsar and author of every populist measure of those days, said he's evolved into a new man. Politicians now are scum. In the course of giving himself an objective mark of A++ for his work for the military regime, he warned that unless the military puts in tough measures, "old politicians will resurface, which will not better the country". This from the man who also gave himself an A++ for his stellar work as an elected politician in the elected Voldemort government.

On Monday the world-class coup expert and eminence grise, First Deputy Prime Minister Prawit Wongsuwon, informed the country that the National Council for Peace and Order will form a political party if it darn well pleases, and what are you going to do about it? In the process he delivered a classic reminder of the cynic's definition of "but": A word signalling listeners to ignore everything said before "but".

"The National Council for Peace and Order will not be involved in politics," he told reporters.

"But if it is necessary, [a political party] will be set up."

Since gambling is illegal, we could not check any official odds on whether the NCPO considers it necessary to have a military man in charge over a politician. Of course it will be necessary. Gen Prawit had a point, which unfortunately came across rather clumsily. His beloved Royal Thai Army intend to claim their right to have control of Government House and parliament. What he tried to point out to the media gaggle was that there are plenty of ways to control every facet of government without all that messy-icky stuff about elections and public approval. 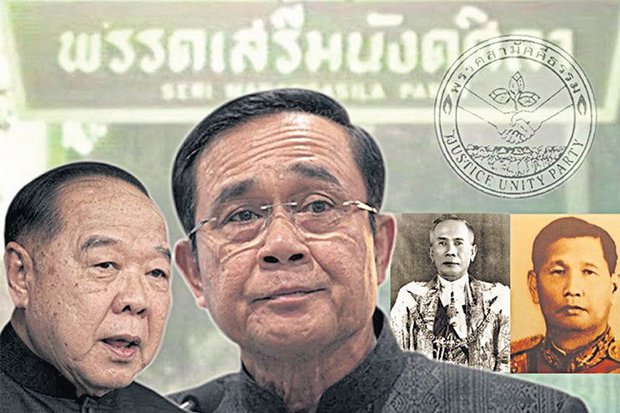 What changed in the past week was a sudden, apparently orchestrated openness. For its own reasons, the regime decided to be a little more candid. Of course the regime would never plant a suggestion with a friendly media person, but it's worth wondering why Gen Prawit got that question on setting up a political party on Monday.

Some of the media are already prepping for a record run at Government House by the general prime minister. That's a little premature.

At three years and 175 days (counting Sunday) he's not even halfway to the mark set by the junta's nominal living hero, Gen Prem Tinsulanonda. The nonagenarian Privy Council chief was just 56 days short of 10 years in power in the 1980s. And he couldn't match runs by two other dictators -- Plaek Phibulsonggram (15 years and a month) and Thanom Kittikachorn (10 years and 7 months).

It is certain that Gen Prayut plans to use the constitution, organic laws and a few other surprises he's spent three years putting into place. Critics are going to pile on and multiply in the coming weeks and months. The toughest job is going to be surviving until the election. Not until then can he safely start pursuing those longevity records.