Sunday was not just another day for running rocker Toon Bodyslam.

The 38-year-old singer, whose real name is Artiwara Kongmalai, on Sunday received the largest donation from one person since he started running on Nov 1. Toon's epic marathon - from Betong district in Yala to the northernmost district of Mae Sai in Chiang Rai - is to raise money for 11 state-run hospitals. 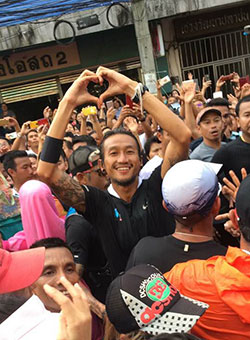 Provincial governor Chamroen Thipayapongthada handed the indie rock idol a cheque for 16 million baht on behalf of Jimmy Chawala when he arrived at Wat Phra Mahathat Maha Vihara, one of the landmarks of the province, in Muang district. The cheque was made out under the name of the people of Nakhon Si Thammarat.

Mr Jimmy has determined to help the rocker on behalf of 1.6 million people in Nakhon Si Thammarat.

The 60-year-old textile trader owns Jimmy Shop, the province's largest clothing store, and is one of the richest people in the province. But he keeps himself humble and low-profile.

"The donation is not my money or the money of the Chawala family," he said in an interview on Monday. "It was the money of all the people in Nakhon Si Thammarat who have come to my shop. They came to support my family."

More than 10,000 people flocked to the temple to see their idol arrive, and several thousand occupied Ratchadamoneon Road outside Mr Jimmy's shop to support Toon.

The businessman declined an invitation to come out to meet him, according to kaokonlakon.com, the official website of the running campaign.

Toon and Mr Jimmy finally met outside the hospital of the Vajiravudh army camp in Muang district as the rocker was running to Tha Sala district.

Toon's next destination on Sunday was the Pa Kob rice and curry shop in Nakhon Si Thammarat's Tha Sala. His run covered 51 kilometres on Sunday - and donations surpassed 180 million baht.

He had arrived in Muang district on Sunday morning from Chalerm Phra Kiat district.

@ParisHilton I'd like to inforn Paris that today is day 12 of running of Toon Bodyslam & he run to Prasrimahatad Temple & receive 16 millions baht from Nakornsrithammarat people already. https://t.co/RY4Desj3ci