Officials inspect the broken hydraulic support on the tentacle after the accident. (Photo by Sutthiwit Chayutworakan)

SAMUT PRAKAN: The organiser of Phra Samut Chedi fair and a ride operator face charges of recklessness causing injuries after a fun ride malfunctioned, two cars fell to the ground and about 15 people were injured, authorities said.

The accident occurred about 9pm on Sunday at the annual Phra Samut Chedi fair in front of the provincial hall.

According to witnesses, two cars attached to a tentacle of the Octopus ride fell to ground during the ride and the equipment came to a sudden stop.

The operator and a technician were later held for questioning at Muang police station. (continues below) 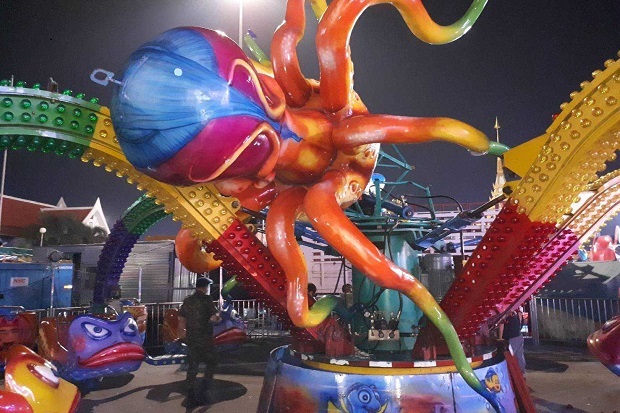 The Octopus ride has been shut down since the accident. (photo by Sutthiwit Chayutworakan)

An initial inspection found that the hydraulics controlling the movement of the Octopus arm had broken,  causing the arm to fall to the ground.

The Octopus ride is owned by 60-year-old Somdech Rasami and the ride was operated by Anuchit Jaithiangtham, 31.

Mr Anuchit told police the ride was almost complete when it malfunctioned and the cars attached to one of its arms fell to the ground. He immediately pressed the emergency stop.

Police were concentrating their investigation on the state of the machine's hydraulics system.

The rotary Octopus ride, known as Tagada, has five arms, each of which has four cars. It can accommodate 40 passengers per ride.

Samut Prakan governor Chartchai Uthaipan inspected the scene and instructed public works authorities to inspect the safety of all rides at the fair and suspend those falling short of safety requirements or with signs of wear and tear.