An oil tanker explodes and catches fire at a factory inside the Amata Nakorn Industrial Estate in Chon Buri on Tuesday afternoon. (Photo taken from @js100radio twitter)

CHON BURI: At least three people suffered burns when a fuel tanker exploded in flames at a factory in the Amata Nakorn Industrial Estate in Chon Buri on Tuesday afternoon.

The explosion occurred  about 1.30pm at the Sea Oil Petrochemical factory inside the industrial estate in Muang district as the truck was discharging its load of oil into a tank, Thai media reported

At least 10 fire trucks and crews were rushed to the factory to battle the fire, which quickly engulfed the tanker. It took them about 50 minutes to put out the blaze.

At least three people suffered burns in the explosion.

Sea Oil trades in petroleum products such as fuel oil and lubricants. 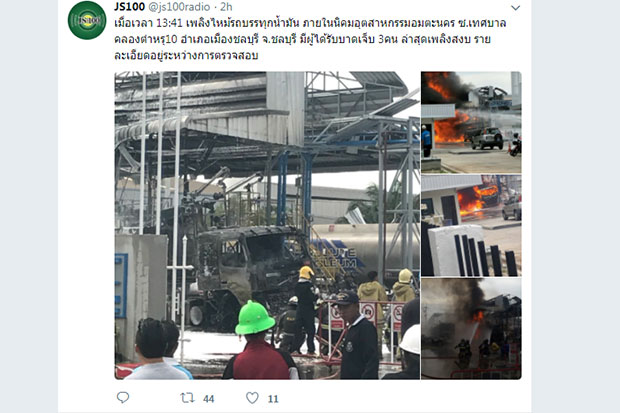