The purpose of the Media Watch/MediaDetector.net app is to get out the word quickly about 'fake news' on the health front.

A new smartphone app, "Media Watch", was launched Tuesday to enable consumers to more easily submit complaints against things they take issue with on the internet.

"Media Watch" is a hotline to the deputy secretary of the Ministry of Public Health, Dr Panpimol Wipulakorn, for citizens who wish to report controversial media they come across on the internet.

"This application represents a new milestone in measures for protecting the younger generation from false information," Dr Panpimol said.

Wasant Paileeklee, manager of the Fund for Development of Safe and Creative Media for Mental Health, which helped develop the app, said the fund will work together with the Family Network Foundation to uncover information that is potentially false so legal action against the culprits can be pursued if necessary.

"The application will maximise input from voluntary contributors in monitoring the media, and integrate with the government to ensure justice for any wrongdoing," Mr Wasant said. 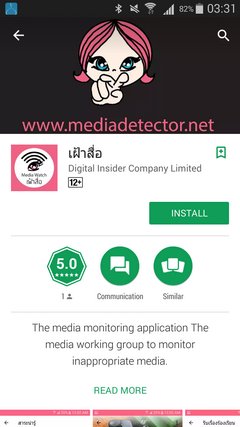 The app is available at the Google Play store, (right) but only under the name "MediaDetector.net".

The ministry's website at www.mediadetector.net currently has a link to an Android APK file, which can be used to manually install the app - not a recommended procedure for most phone or tablet owners. APK files are generally for use only by programmers or highly experienced users.

Manager of the Family Network Foundation, Tanichaya Limpanich, informed the press that an existing group of volunteers has continuously worked on preventing information that is deemed inappropriate from surfacing but now plans to allow netizens to contribute to helping the community too.

"Our team under the Family Network Foundation have been trained to professionally document complaints lodged by citizens, with proper protection under information privacy laws, to help build a trustworthy environment between the state and the people," she said.

"This joint commitment will benefit society as a whole, especially adolescents. It will hold those who post inappropriate content accountable for their actions, as there are currently no proper channels of accountability for those who fall victim to falsified information to pursue," she added.

Also Tuesday, the National Institute of Development Administration organised a "Change to Shine" seminar, inviting leaders in the film, news and communications industries to share their ideas about steps to move the media industry under the Thai Society 4.0 initiative.

The panellists expressed the importance of speed in the digital era after the significant shift from traditional media to digital media, as well as the need for information verification.

Chief strategy and innovation officer Kittipong Veerataecha said it is necessary to foster an environment where collaborative learning is possible.

"Nowadays people put more trust in regular people who monitor situations because traditional news agencies lack the transparency and rawness of people who are actually part of an event, or actual victims of something that surfaces on the internet," he said.

"The education system should change their approach to teaching. They must teach them how to think, not how to believe," he added.