Floodwater nears the rooftop of this house in Saba Yoi district of Songkhla, where all 16 districts have been declared flood disaster zones. (Photo by Aswin Pakkawan)

All 16 districts of Songkhla have been declared flood disaster zones as heavy rain and flash flooding continues to pummel the southern provinces.

Wasant Chaithaweepong, acting chief of Songkhla provincial disaster prevention and mitigation office, said on Friday that the flooding had now extended to all 16 districts of the province,

All districts had now been declared disaster zones, to enable speedy provcision of assistance, he said.

Saba Yoi district was the worst hit. Lae Baeng village in tambon Saba Yoi was cut off from the outside world with the floodwater rising to over two metres deep.

Police deployed boats to help evacuate residents from the village. Many sought sought refuge at  a temporary shelter at Saba Yoi district office.

Thepha and Na Thawi districts are also among the worst affected.

In Nakhon Si Thammarat, the floodwater rose to over 1.5m in some areas of Muang district on Friday.

The Royal Irrigation Department and the Muang municipality installed water pumps along main canals to drain water around the clock. Several schools suspended classes on Friday.

The flooding has expanded to other areas in 23 districts of Nakhon Si Thammarat, of which 15 have been declared disaster zones.

One resident drowned while moving belongings in his flooded house in Muang district on Friday.

One school, seven temples, five government offices, 138 roads, six bridges and five bridge necks were damaged during the flooding. Damages to agricultural areas, fisheries and livestock were being surveyed. (continues below) 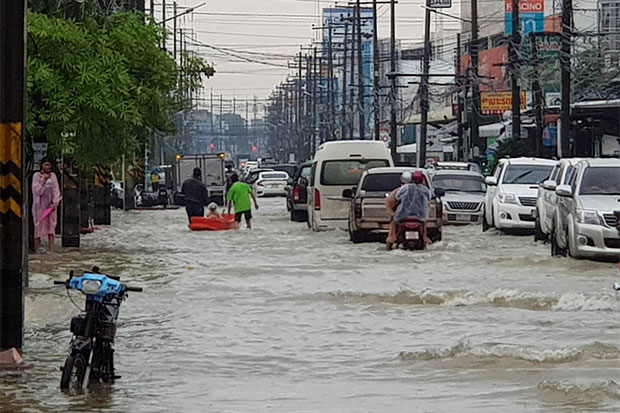 A flooded main road in Nakhon Si Thammarat, where 15 of the 23 districts have been declared disaster zones. (Photo by Nujaree Raekrun)

In Surat Thani, residents living in Kanchanadit district were told to move their belongings to higher areas as runoff from nearby Nop Phi Tam district of Nakhon Si Thammarat would flow into the district.

In Trang, a 39-year-old nurse drowned after her car was swept into a canal in Ratsada district.

Police rushed to Khlong Kham canal in tambon Khuan Mao and found the Toyota car with a Trang licence plate in the canal after being alerted at around 3.30am on Friday.

The driver, identified later as Sumalee Khaenyuk, 39, a nurse at Ratsada Hospital, was found drowned in the wreckage of her vehicle.

A police investigation found that Sumalee was driving to the hospital, about 10 km from her house, for a night shift work. At the time, it rained heavily and several road sections were bumpy and flooded. This might have caused her to lose control of the vehicle, said police.

The Meteorological Department on Friday issued a weather warning for 13 provinces in the South.

The department reported that a lower-pressure area covering Malaysia and the lower South of Thailand is moving to the Andaman Sea. Outbreaks of continuous rain are forecast with torrential downpours in much of the South on Friday.

There is a possibility of strong wind waves in the Gulf of Thailand and the Andaman Sea rising 2-3 metres high. All ships should proceed with caution and small boats should be ashore. 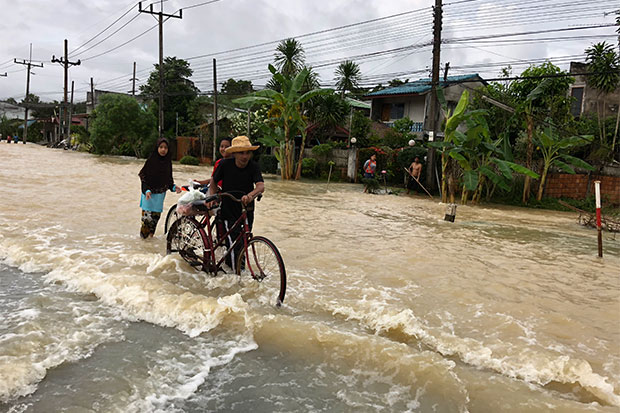