Cars are restricted to using the right lane of Suk Sawat Road in Samut Prakan by flooding caused by this morning's very high tide. (Photo by Suthiwit Chayutworakan)

A section of the road near Phra Samut Chedi-Phra Chulachomklao Fort Intersection looked more like a canal, with local people commenting the inundation was "unusually high" this year.

Small vehicles were restricted to using only the right lane, which led to a traffic snarl and a six-kilometre tailback of cars inching along the road.

The water was reported to have reached 80 centimetres deep in front of Phra Samut Chedi municipal office and up to 1.5 metres near Wat Laem Fapha on a minor road off Suk Sawat.

Workers from the Disaster Prevention and Mitigation Department were using pumps to divert water out of the area.

Very high tides are expected for another two or three days, according to officials. 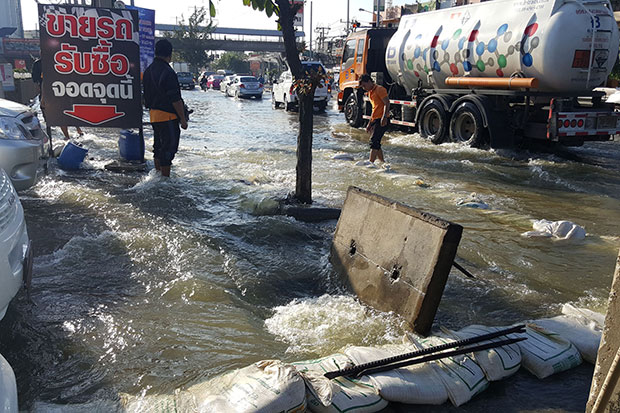 A wall of sand bags fails to hold back floodwater along Suk Sawat Road. (Photo by Suthiwit Chayutworakan)