Orchard growers from Ratchaburi showed up Wednesday at the Department of Agriculture to eat their own fruit in an attempt to show it's safe despite use of controversial herbicides and pesticides. Conservationists are lobbying for a ban on two specific chemicals in agriculture. (Photos by Pattarapong Chatpattarasill)

Thai Pesticide Alert Network (Thai-PAN) will today submit a petition to the Ministry of Industry, asking it to ban the herbicide paraquat and the pesticide chlorpyrifos, while restricting the use of glyphosate.

The request, according to the group which campaigns for banning harmful pesticides, is based on Ministry of Public Health recommendations and research findings on health effects and the level of contamination in vegetables and legumes.

The petition is timed to coincide with a meeting of the ministry's committee on hazardous chemicals which will decide on the use of the pesticides.

The petition urges the committee to classify paraquat and chlorpyrifos as a "hazardous" substance which will lead to a total ban on production, imports and exports or even buying and selling. Regarding glyphosate, the network wants the committee to monitor the use strictly.

In the letter, the group cited the names of countries that banned the pesticides. For example, weed-killing paraquat was already banned by 52 countries and 17 have strict regulations in place for its use. 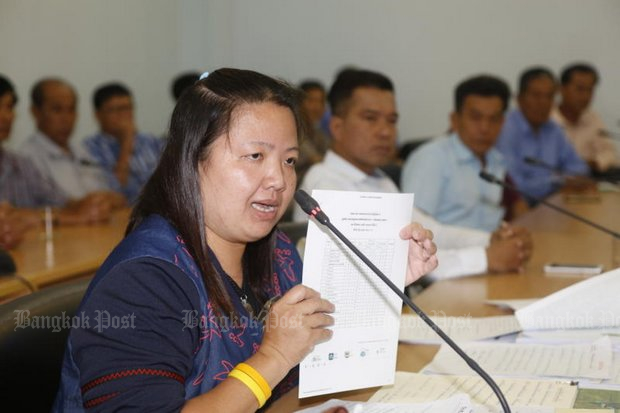 Activists from the Thai Pesticide Alert Network (Thai-PAN) say they have the documents that prove paraquat, chlorpyrifos and clyphosate are unsafe and should be totally banned or restricted.

Cited by the network was Pornpimol Kongthip, a researcher of Faculty of Public Health, Mahidol University. Her research of 53 toddlers in Amnat Charoen, Kanchanaburi and Nakhon Sawan provinces showed paraquat contamination among them.

The finding, she said, shows that paraquat can be transferred from mother to baby in the womb.

Witoon Lianchamroon, director of Biothai, an advocacy group on sustainable agriculture, said he was worried the decision of the committee is likely to be swayed as two of the 10 members on the committee are from chemical companies.

He said a report cited by the ministry that banning the chemicals will contribute to an economic loss of over 70 billion baht is also groundless. "On the contrary, banning the use of these pesticides will help farmers reduce costs," said Mr Witoon, claiming the use of paraquat has doubled the cost of farming.

The group will also submit the letter to the Ministry of Agriculture and Cooperatives, demanding a clear explanation as to why the department of Agriculture has decided to renew the paraquat registration licence. It also said the licence will be immediately revoked if the committee decides to ban these pesticides.

In another development, representatives of farmers in Damnoen Saduak district in Ratchaburi Wednesday submitted a letter to the Department of Agriculture to support the use of the pesticide. They said paraquat is important for farmers who want to eliminate weeds in the fields.