Sea gypsies want a chance to settle down

Eviction from forests and exploitation have deprived the Maniq minority of a livelihood. Many now want to quit the nomadic life

A Maniq man hunts in a forest using a traditional blowpipe.

The Maniq sea gypsies, more widely known as the Sakai, have made the southern coast their home for generations but have few entitlements to their name.

In years past, the nomadic sea tribe people crisscrossed the waters around the Malay Peninsula before large groups of them settled in the lower southern coast of Thailand.

The Maniq people are from the Negrito ethnic group which has lived across the northern states of Malaysia that share borders with southern Thailand. Maniq tribesmen are also known to Malaysian people as "Orang Asli".

In Thailand, the Maniq minority live in the southern provinces of Yala, Narathiwat, Phatthalung, Trang and Satun.

As a result of their altered migratory patterns, it has been an arduous task for authorities to locate and enrol them in the civil registration process so they can be granted Thai nationality and an ID card, giving them access to basic welfare benefits.

Many Maniq people in the South are legally-registered Thai citizens who obtained state welfare after passing a DNA verification process to confirm their bloodline relations and "hereditary roots" with their ancestors who lived in the southern provinces over previous generations.

The government has now intensified its efforts to have more than 300 other Maniq people -- who have not been left stateless but are qualified for citizenship -- apply for civil registration, particularly those who have lived along the Banthat mountain range wildlife sanctuary in tambon Nam Phut of Langu district, and tambon Thung Wa of Thung Wa district in Satun province.

As they entered the DNA verification process, Thao Khai Srimanang, a leader of the Maniq community in Satun, led tribal members to meet authorities and medical staff to get a blood sample taken. 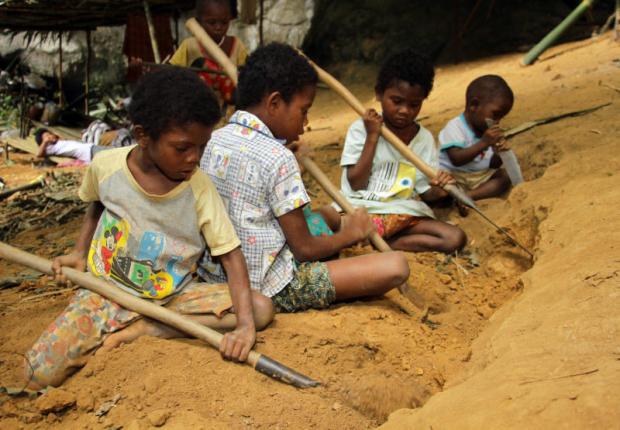 Maniq families live together in loosely built thatched huts where the young ones learn their traditional way of life and how to use tools for various purposes.

"We don't like the word 'sakai' because it is derogatory, implying 'slave' or 'barbarism', similar to 'khaek' for Indians, or 'jek' for Chinese," he said.

"We call ourselves Maniq which means 'human' because we are no different to other people," Thao Khai said.

Under the International Convention on the Elimination of All Forms of Racial Discrimination, which Thailand joined in 2003, the government must provide proper human rights protection to all ethnic minority groups regardless of race.

They must be entitled to acquire citizenship and gain access to basic medical and educational welfare, justice as well as other benefits provided by the state on par with those offered to Thai citizens.

Pitikan Sithidej, director-general of the Rights and Liberties Protection Department under the Justice Ministry, said the Maniq in the South are categorised into two groups based on where they live. 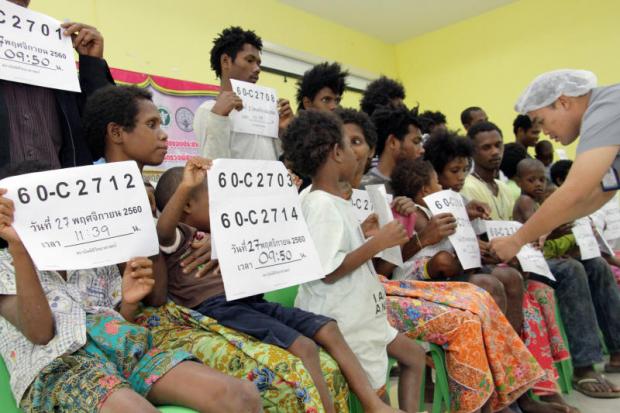 A community of Maniq sea gypsies, more widely known as Sakai, has settled in an area near the southern coast. Although exposed to modern society, the Maniq sea tribe people retain their nomadic existence. Many have applied for Thai citizenship which is a ticket to welfare entitlements and medical benefits. photos by Tawatchai Kemgumnerd

The verification process is jointly conducted by the Justice Ministry, the Central Institute of Forensic Science, law academics from Thammasat University and the Department of Provincial Administration, which oversees the enrolment of Maniq minorities in the civil registration process.

"Many Maniq people in Satun are off the civil registration radar despite attempts to legally register them as Thai citizens due to their shifting migration patterns," Ms Pitikan said.

It took a long time for authorities to locate them and make them understand the process of verifying their DNA with their ancestors as they sometimes migrated deep into the forests and many were afraid of being duped by city people.

Some Maniq people declined to give blood samples for the DNA test as they believed the blood would be sapped from their bodies, she said.

As for Thao Khaek's group, Ms Pitikan said Thao Khai and his son, Ad Srimanage, were the only two people in the group who can speak Thai in the central and southern dialects.

Both confirmed their ancestors have lived in Langu district of Satun for decades. They are not among those who emigrated from Malaysia. 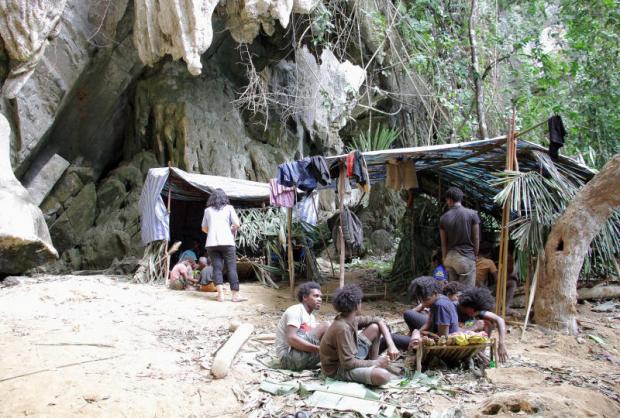 Mr Ad said he was the only person in the group who attended school. He graduated in Mathayom 6 (12th Grade).

Despite being fluent in spoken Thai, he is unable to communicate with the Maniq in other areas due to their different dialects.

Mr Ad recounted that in his early childhood, he followed his group which moved from place to place in search of food and water. They earned a living by hunting wild animals and collecting wild food in the forests.

When food ran out, they set off to a new place.

Speaking about the hardship faced by fellow ethnic tribes people, Mr Ad said it was more difficult for the present generation of Maniq to adjust themselves to living in a modern-day environment. He noted the older tribe members enjoyed greater ease in co-existing with the world with fewer temptations and less exploitation.

In early times, herbal medicines concocted from wild plants were used as a cure for illnesses. However, those traditional drugs are largely ineffective now as many sick Maniq have consumed contaminated food and water which have compounded their conditions, often requiring complex treatments.

Food sources have also dwindled and the Maniq people are growing tired of roaming aimlessly between various places, according to Mr Ad.

"We should have equal rights to welfare benefits as Thais after being granted Thai citizenship and getting ID cards. When we fall ill, we could go to hospital for treatment," he said. 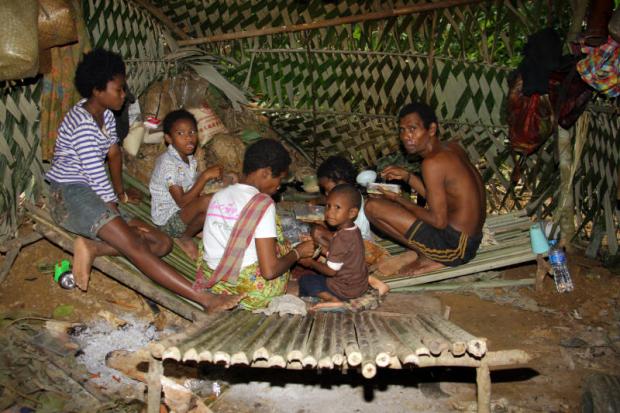 Mr Ad said he and his people would be glad if the state allocated them land on which to live permanently and farm. If they moved to the forests, forestry authorities would evict them or if they went further inland near the cities, they would face discrimination on the basis of their looks, with their distinctive frizzy hair and tanned complexion.

He was once paid 20 baht a day weeding a garden at a home in Satun province. That wasn't enough for him to buy food or other basic necessities. Given their tendency of being exploited by ethnic Thais, he said his group needs land on which to make a living by growing non-chemical vegetables for sale.

Mr Thao Khai also agreed that with forests now off-limits to the Maniq, they could not hunt for animals as they once did. At the same time, many have been evicted from their habitats in forest reserves, forcing them to look for jobs in downtown areas, which exposes them to labour abuse or being exploited by unscrupulous employers.

"Some Maniq people earn income from tourism. Hotels and resort operators hire us as guides on trekking tours. However, only a few of them work this kind of job because they are afraid of being conned by city people," he said.

"When they get sick, their leader tells me and I will help take them to hospital in the downtown area," he said.

Thanee Hayemasa, the Langu district chief, said after relations between all Maniq minorities and their ancestors are confirmed by DNA testing, local administrative officials will proceed with issuing them ID cards. In fact, several Maniq sea tribe people received the citizenship last month.

Officials from various state agencies will also discuss the allocation of state land to the Maniq and designate the tribe members to villages in the district, he said.