A week ago today we told a first-time visitor from the beautiful US state of Colorado to forget about seeing "the real, so-called authentic Thailand" because there isn't a square centimetre where tourists do not tread. The next day we set out on a family trip to places with not a foreign face in sight (one obvious exception).

In the North, the hills are alive with the sounds of boom-boxes, big bikes and "Brrrrr" but Thailand's most popular, crowded winter mountaintops are curiously foreigner-free. They're missing a lot, the foreign tourists.

Even in all of the past year's fabulously earned tributes for the late King Bhumibol Adulyadej, the praise he deserved for his 50 years of selfless work in the country's most rugged areas was muted.

So we went up Doi Ang Khang again to see.

As Thai mountains go, it's middling -- top 10 in height and popularity, excellent road with no thrills, and never a degree below zero. At the summit is the rest house slash restaurant, with its below-par buffets and unexciting cabins and family bungalows.

What Ang Khang has is the best story with the best achievements in the past 50 years -- we think -- in Thailand. Or at least as good as the emergence of the Thai middle class. This bootstrap operation began with a visit by the King in 1969, shortly after he ended his foreign visits and vowed never to leave Thailand. 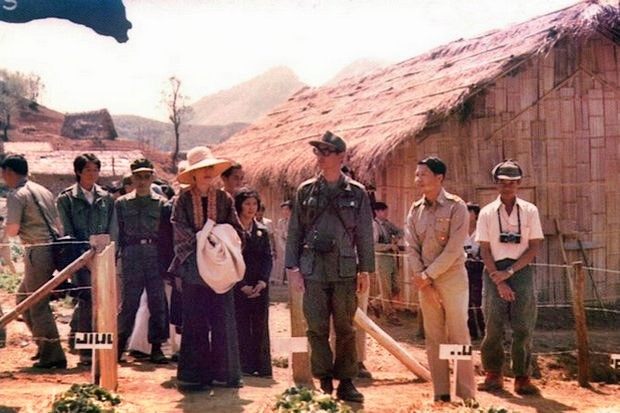 The King, often with Her Majesty Queen Sirikit, visited Doi Ang Khang regularly after 1969, when he spotted both the problem and solution to the plight of the mountain people on his first trip. (File photo)

The mountain is home to possibly the most diverse populations in the kingdom. The Black Lahu claim to be the indigenous people among a virtual sea of tribes and groups. Among the others: Palong (Palaung), Karenni, Akha, Lahu, Lu Mien, Yao.

The "newcomers" are the Chinese who arrived from Yunnan after 1949 with the armies of Generals Lee and Tuan, fleeing the communists, and including the Haw people who established Islam as one of several beliefs that embrace Buddhism, Christianity and a host of animist groups. There is no apparent conflict among these diverse races, colours and creeds, and everyone happily speaks central Thai. 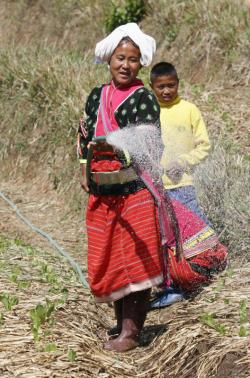 A hilltribe woman and her son water vegetables at a royal project farm near Doi Ang Khang. (AP photo)

The changes to this high country in two generations is stunning and revolutionary. When King Bhumibol's helicopter set down on the summit of Doi Ang Khang, the area had people so poor they made the "poverty-stricken Northeast" look wealthy.

Children were almost all malnourished; there was literally starvation. There was almost no economy beyond the family and barter.

The hills and valleys then were beautiful. There were three colours of flowers: white and pink and red.

There was no transportation but once a year, in February or early March, Lo Hsing-han and later Khun Sa sent out their buyers to Ang Khang and other Thai hills to buy the crops, although "buy" is an exaggeration. The criminal gangs gave opium farmers whatever they wanted, and with no leverage to bargain, the farmers took the pittance.

The king didn't just recognise the cause of the poverty. He saw immediately on his first trip to Ang Khang mountain the solution.

The development of any crop or business -- any at all -- would result in a rise in the incomes of the mountain's inhabitants. That's easy to see now. But in 1969 and all through the 1970s the king actually met resistance from hi-so, government and others. It was if they had a vested interest in keeping the opium fields that shattered dignity and life expectancy of the hill's people.

King Bhumibol's incredibly enlightened approach and, yes, persistence changed everything on Ang Khang. The royal project at the cold top of the mountain has hundreds of rai of productive and experimental crops. Japanese apricots are now a focus.

It's a thriving economy, agriculture based but spawning small towns of shops. Coffee, vegetables of all kinds and flowers are among the top crops. And tea. And entrepreneurs. A sharp young businessman rents tea-picking baskets to tourists for 50 baht for 30 minutes so they can take photos and selfies and brag on Snapchat and Instagram about how they worked the whole day with local people to help them bring in the tea crop.

A tourist's review: The food at the Ang Khang mountain-top resort could use some improvement. A lot, really.

So, a tip for visitors: Ms Buakaew Intha's Ang Khang Muslim Food Shop right in front of the traffic circle at the park entrance serves the best khao soi above 500 metres in all of Asean.