CHIANG RAI: Artiwara "Toon" Kongmalai resumed his charity run in the northernmost province early Sunday morning as donations to his South-North run to fund needy state hospitals exceeded 1 billion baht, one day before the conclusion of his 2,191-kilometre-long run.

The 38-year-old rocker started the day at Pukaeng School in Phan district at 2.45am when the temperature was 8 degrees Celsius and mist covered his route. Famous Muay Thai boxer Buakaw Banchamek, actors and actresses were accompanying him.

Local residents in winter gear were waiting to cheer Toon along the route. They were sitting near fires to keep themselves warm early in the morning.

Toon was set to run 65.40km on Sunday. He is nursing a shoulder injury, and his team were telling local people that Toon had to refrain from giving his autograph in order to contain the injury.

Wat Rong Khun - the White Temple - in Muang district was among his stopovers Sunday. About 100 nurses and nursing students from Chiangrai Prachanukroh Hospital were among the crowd of 1,000 people waiting for Toon at the Buddhist temple.

The nurses and nursing students prepared performances to welcome Toon as their hospital was set to be among 11 state hospitals to receive funding from the charity run.

Prakaikaew Kakham, deputy director of the hospital, said that an emergency building was under construction at the hospital, and the grant would help support the project serving people in Chiang Rai and nearby provinces.

The hospital management gathered donations of about 360,000 baht from hospital staff and local residents to add to the charity run fund, she said.

Toon started the run in Betong district of Yala on Nov 1 and the destination is Mae Sai district of Chiang Rai. He was set to reach the northernmost location of the country in Mae Sai on Monday.

As the donations reached 1 billion baht, Toon had about 50km remaining in his mission to raise 700 million baht for state hospitals by encouraging 70 million Thais to donate 10 baht each - a goal he has already far surpassed. 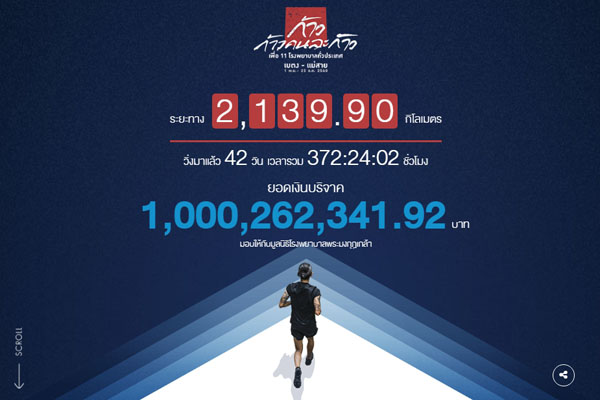 The www.kaokonlakao.com website shows the donation total has exceeded 1 billion baht on Sunday.