After striking southern Vietnam, Tembin has weakened due to wind shear, and will likely be a Tropical Storm (wind speeds of 63-119kph) when it hits Thailand around noon on Wednesday. (twitter/@wunderground

After wreaking havoc in the Philippines, Typhoon Tembin will weaken to a tropical storm or depression by the time it reaches Thailand, according to the Thai Meteorological Department (TMD).

The typhoon, at one time packing winds of more than 120 kilometres per hour, was expected to be downgraded to the status of tropical storm (wind speeds of 63-119 kilometres per hour) before the early effects reach Thailand on Tuesday.

The Meteorological Department forecasts "heavy rain in some places over the south in Prachuap Khiri Khan, Chumphon and Surat Thani".

But no weather warnings or storm watches have been issued in Thailand, apart from the standard caution by the Meteorological Department for small boats to remain ashore until waves subside.

That is in contrast to Vietnam, where Tembin made landfall on the southern coast late Monday. As of Monday night, authorities had evacuated "several hundred thousand people" in the country from along the coast in the southernmost provinces.

But as far north as Vung Tau city, thousands of Vietnamese fishing boats halted their months-long fishing trips to return to shore.

Earlier, Tembin killed at least 230 Filipinos in the Mindanao area of the southern Philippines. Among the hardest-hit places was the Zamboanga Peninsula where 69 people died and 44 others remained missing as of Monday night, a police spokesman said.

The weather system is expected to move down over the Gulf of Thailand and across the southern region late Tuesday and Wednesday.

Residents in the South have been warned to brace for heavy rainfall, as have those living in coastal provinces along the Gulf of Thailand, particularly Prachuap Khiri Khan, Chumphon and Surat Thani, according to the TMD.

In three days, the mid-South is expected to be hit with more than 40mm of rain before the storm wanes on Saturday.

Small boats are advised not to put to sea while larger vessels should take precautions. Authorities have also warned coastal communities that waves could reach 2-4 metres high, with strong winds. 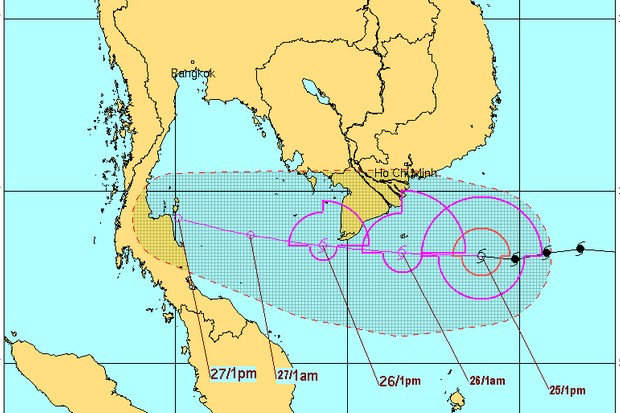 In a separate forecast, the Meteorological Department warned of another cold front that will hit the country on the upcoming New Year holiday weekend.

Bangkok will see a 1-3°C drop in temperature and thunderstorms in some areas between Tuesday and Friday, when the four-day holiday begins.

It also sounds like good news for holiday travellers, although scattered rain is forecast for the North from Wednesday through Saturday.

"During 30-31 Dec, another strong high pressure area from China will extend over upper Thailand and cause cooler temperatures, with drops expected by 2-4 degrees Celsius," said the forecast.

It will be "very cold on mountaintops with isolated frost, and minimum (overnight) temperatures of 1-6 degrees".