What is Tu to do?
Thailand
General

What is Tu to do?

Uncle Tu took the cabinet upcountry yet again, and yet again they came back wondering why the heck they didn't stay in Bangkok, where they're obviously more comfortable and no one expects them to do awkward, ethnic stuff.

Sukhothai and Phitsanulok weren't such a shambolic two days as Narathiwat and Songkhla last month. But there were still way too many surprises.

In Sukhothai, a former capital for heaven's sake, 500 disloyal, illegal ruffians and riffraff had the nerve to hold a protest against coal-fired power plants. They probably weren't even Thai people. Real Thais know that the power plant that a caring government is planning to help to develop the country will be in Songkhla. In the North, people generate their pollution by burning fields.

Now, all of that said, we are so extremely fortunate that the country finally has a government that has cut out all the populism. To stress the importance, it has made populism illegal through the constitution.

Now, the military regime only deals in gifts for the people, which is nothing like populism at all.

In populism, which is used only by despicable politicians who make promises to the people, the untrustworthy and unscrupulous government members use promises and appeals to try to be popular. They give loans to farmers and subsidies to low-income people. They even bribe people to try to win contests for minuscule amounts of cash.

The disciplined government, by contrast, is run by ministers experienced in the military way: selfless, dedicated, incorruptible and willing ... no, strike that, eager to sacrifice for the nation.

They provide gifts for the people, set highly reasonable prices for crops, and convince banks to help farmers who are in debt. Low-price or even free electricity is provided to poor people, and every newborn baby in the 65 upcountry provinces has a chance to win 1,000 baht in a special one-time lottery next month. 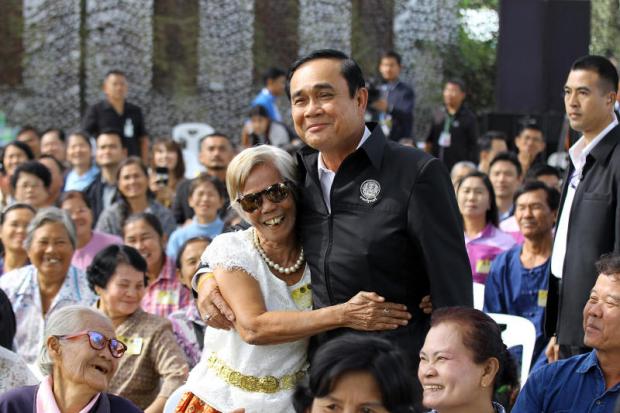 The differences between bankrupt populism and upstanding non-populism are easily seen at every step.

Populism is setting a support price for rice. Non-populism is convincing the government-run Bank for Agriculture and Agricultural Co-operatives to do so.

On Thursday, Gen Prem Tinsulanonda hosted what he called a Happy New Year party for Gen Prayut and his cabinet at his near-legendary Sisao Thewes home. Such invitations by the 97-year-old eminence grise of coups and military politics are few, to say the least.

Except it wasn't so happy. Gen Prem served up political unpleasantries that the PM is never going to hear from a yes-man or a subordinate (but we repeat ourselves). Gen Prem's analysis is that Gen Prayut's support is leaking faster than a cheap submarine on the rocks. In fact, "It's almost gone".

That's what he said.

We don't resort to common words such as "lame" here as they do in the downmarket dailies, but Gen Tu's reply to the warning was ipecac.

No way, he insisted, that he has lost sight of that May 22, 2014, goal of bringing happiness to the people. And he has the supply of populist campaign slogans and programmes to achieve it. Higher wages? No problem. Trains for all? You bet. Thailand 4.0? No question. And so on.

Gen Prem is famous, but not for his predictive political prognostications. Still, we think he is right on with this one. So we will (humbly) stick with what we wrote on the day that official mourning ended for King Bhumibol, three days after the magnificent funeral and cremation ceremonies.

Starting tonight [Oct 29], the army and its military regime will never gain an additional supporter, whether it hands over power next month, next year or later.

Beginning tomorrow, the number of critics will increase and then the volume and number of opponents will grow.

The general prime minister seized power from a legal civilian establishment to stop the political battles and to restore Thai unity. Which is what happened last week [during the funeral].

The justification now is paper-thin. Literally.

"We have to complete the paperwork and then you can have your precious election."