SURAT THANI: The driver of a bus that skidded off a road on Monday, injuring an American passenger, tested positive for drugs, a police officer said on Tuesday. 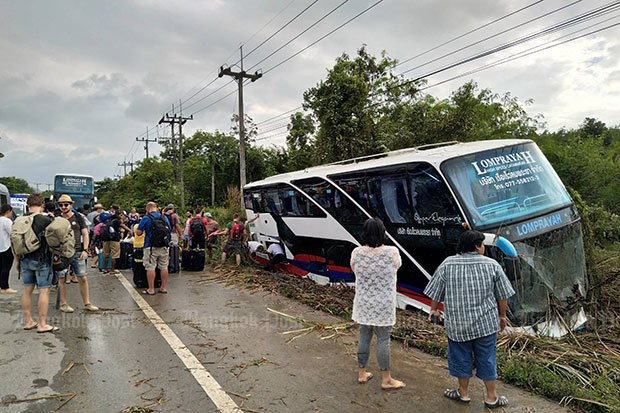 A double-decker bus operated by Lomprayah Co skidded off a road in Don Sak district in Surat Thani on Monday. (Photo by Supapong Chaolan)

The tests were carried out by Don Sak Hospital after the double-decker bus operated by Lompraya Co skidded off Road 4142 in Don Sak district in Surat Thani on Monday.

The driver said the bus was taking 35 tourists from Krabi to a Lomprayah pier in Don Sak, where they were to board a ferry to Koh Samui.

Pol Col Sutthi said the driver and his assistant have been charged with having narcotic substances in their bodies, and their cases will be forwarded to state prosecutors in the province on Wednesday.

They could face fines of up to 40,000 baht and an unspecified jail term if found guilty, according to Manop Sutthiphan, the chief of the land transport provincial office.

The transport official said Lomphayah had informed his office that both of them had been fired following the accident.