Watana gets another 80 years for bomb attacks
Thailand
General

Watana gets another 80 years for bomb attacks

Retried engineer Watana Pumret, earlier convicted of last year's Phramongkutklao Hospital blast, was yesterday given a jail term of 80 years and six months after he was found guilty in three more bombing cases.

The Criminal Court on Thursday ruled Watana, 63, guilty in the three cases which occurred in Bangkok in 2007 and 2017. The sentence is the combined total from the three and comes in addition to the jail time he was handed earlier.

The court also ordered him to pay a total of 140,000 baht in compensation with 7.5% annual interest to victims in the first two cases.

The first case was a bomb attack outside the now-defunct office of the Government Lottery Office on Ratchadamnoen Klang Avenue in Phra Nakhon district in April last year, resulting in three injuries.

The second was a blast in front of the National Theatre in the same district in May last year, leaving two people injured.

The third was a 2007 bombing at a phone booth outside Major Cineplex Ratchayothin in Chatuchak district in which there were no injuries. 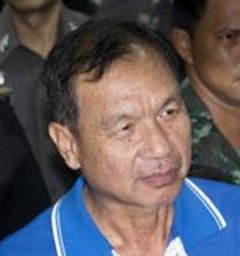 The court ruled Watana guilty of attempted murder, unauthorised possession of armaments and explosives, causing serious injury to others and carrying explosives in public areas.

His crimes fell under various laws: the Criminal Code, the Weapons, Firearms, Explosives and Fireworks Act, and the Arms Control Act.

Watana was previously convicted by the court on two other charges.

For his previous convictions handed down last year, the retired engineer was given four years in jail and a 975-baht fine for possession of explosives found at his house in Bang Khen district.

The court also sentenced him to 27 years in jail and a 500-baht fine for plotting the bomb attack at Phramongkutklao Hospital in May last year.

The jail terms from his convictions in the three cases Thursday combined with the two previously completed convictions totalled 111 years and six months.

Watana was taken from the Bangkok Remand Prison, where he is serving his jail sentence for the hospital blast, to the court to hear its ruling. His wife was also present.

Watana pleaded guilty to all charges in the three cases. He did not submit a bail request.

Before Thursday's ruling, Watana asked the court to commute his sentences if found guilty as he had cooperated with authorities in the course of the investigation.

The court said it considered his guilty plea and the gravity of his offences in arriving at its judgement.

Aside from these five cases, Watana is also standing trial for two other bombings in the city.

He has been accused of having planted a bomb at a phone booth in front of the Royal Thai Army Headquarters in Phra Nakhon district in September last year, which left two policemen seriously wounded.

In the last case, he allegedly planted a pipe bomb at another phone booth in Dusit district, which injured one person.

Both these cases were brought to court by prosecutors in September and October last year.