A TV host and three others, including her two-year-old nephew, narrowly escaped when a van they were travelling in caught fire in Bangkok’s Thawi Watthana district on Friday evening.

Police and rescue workers rushing to the scene found the Volkswagen Caravelle with Bangkok licence plates engulfed in fast-spreading flames. All people in the van left it for their own safety.

Two fire trucks were sent to the scene. Firemen later managed to put out the fire, which completely burned the van. No deaths or injuries were reported.

Pvt Pandit Supong, 21, driver of the van, told police he was taking his boss and his family from their house in Pattanakarn area to Phuttanonthon Sai 3 Road. When arriving at the area, he heard a loud bang underneath the van as if the vehicle hit a big stone.

As the vehicle was losing balance, he shifted to the left lane. A burning smell was detected before the engine compartment was engulfed in flames. All quickly ran out of the vehicle.

Maj Kritphol Svetanandana, husband of TV host Chayada “Bo’’ Liewchalermwong, said he and his family were on the way to visit his friend on Phuttamonthon Sai 3 Road, not far from the scene. He said the van used a multifuel engine -- petrol and LPG.

On her Instagram, the TV host posted an image of the wreckage of the van on Saturday and said she was lucky that her husband, her two-year-old nephew and she survived the incident. She also thanked all fan club members for their concern. 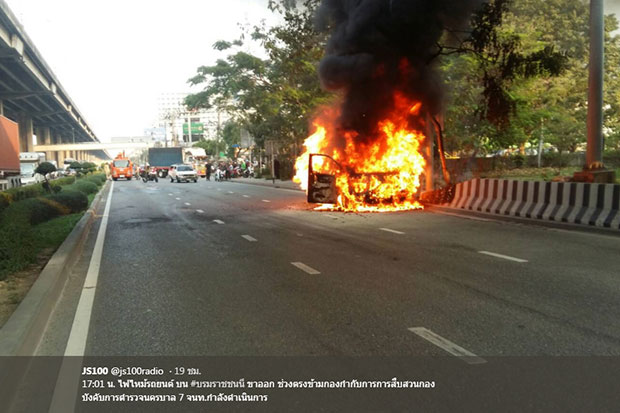 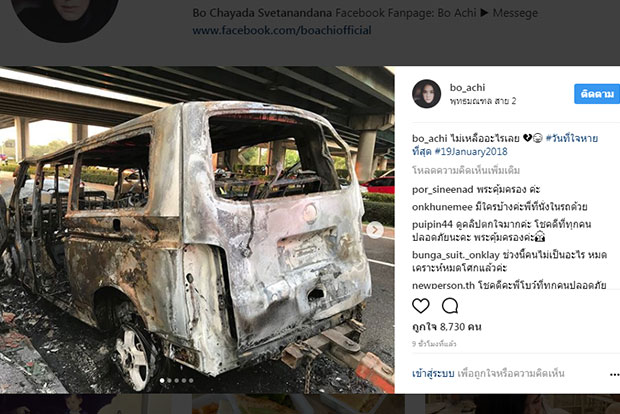