Officials found skinned carcasses of protected wild animals, including a 1.48-metre-long black panther, a Kalij Pheasant and a barking deer, three long-barrelled guns and ammunition in his possession. (continued below)

“At this stage, we learned Mr Premchai had sought approval to visit the park in one of the allowed zones. However, he went in before getting the approval and entered a prohibited zone," he said.

The Kanchanaburi court in Thong Pha Phum district granted them bail on a surety of 150,000 baht each on Tuesday evening. 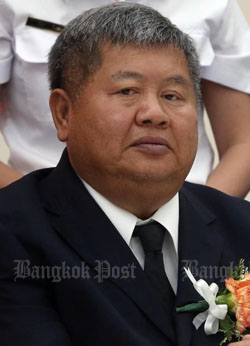 Early on Tuesday, Natural Resources and Environment Minister Surasak Kanchanarat said Thanya Netithammakul, director-general of the Department of National Parks, Wildlife and Plant Conservation, reported the arrest to him and he ordered officials to carefully investigate the issue.

Mr Premchai and the three other people entered the wildlife sanctuary on Saturday. They informed park rangers they were going on a two-day-one-night trekking and camping trip. They would use the 30-kilometre Tinuai-Tikong-Maharat trail.

On Sunday a Maharat forest ranger unit informed the sanctuary management that Mr Premchai's group were staying in a no-camping area.

Rangers were sent to their camp and brought them back to the sanctuary office about 2.40am on Monday.

The suspects were still being questioned at Thong Pha Phum police station on Tuesday.

Sasin Chalermlarp, chair of the Seub Nakhasathien Foundation, said Thungyai Naresuan Wildlife Sanctuary became a World Heritage site in 1991 and anyone with high social status who hunted in the area showed disrespect for the law and for conservation efforts.

He praised local park rangers for their work, and encouraged the government to set a good example by strictly enforcing the laws pertaining to the case.

Kanchana Nittaya, director of the Wildlife Conservation Office, said on Tuesday afternoon that Mr Premchai had not sought permission to enter the wildlife sanctuary in advance.

She also said Mr Premchai's group told officials at the gate they wanted to camp in the sanctuary because they loved nature.

Because it was a small group and they planned to camp out, rangers looked for them out of concern for their safety.

Instead, they discovered a camp, guns and the carcasses of protected animals.

Hunting and possessing wildlife were liable to up to four years in jail and/or a fine of up to 40,000 baht, Miss Kanchana said.