Bomb disposal officers inspect the scene of the bomb blast near a local school in Yala's Yaha district on Tuesday morning. The explosion wounded a defence volunteer, a woman and a student. (Photo by Maluding Deeto)

A defence volunteer, a school-mum and a young student were wounded when a bomb exploded near a school in Yala’s Yaha district on Tuesday morning.

The roadside bomb detonated about 50 metres from Seyor School in tambon Ba-ngoisinae.

Pol Capt Prinya Hethak sid the explosion was reported at 7.58am.

Police cordoned off the scene, which was being examined by an explosive ordnance disposal team.

The blast partly damaged a nearby power pole and left pieces of metal and other bomb debris scattered over the area.

EOD officers said it was home-made bomb, weighed 1-2kg and was detonated by radio.

Police said Mr Thawee was a member of a team on motorcycles assigned to provide security for teachers.The bomb exploded as they drove passed the spot.

The explosion injured Mr Thawee. Ms Suwaiba, who took her child to school on a motorcycle, was also injured, as was a young girl who was walking to school.  No teachers were hurt.

In nearby Pattani province, an assistant village head was shot dead at a food shop near a mosque in Muang district about 8.30pm on Monday.

Samai Talormeeyae, 51, was attacked by two men on a motorcycle. The pillion rider fired three shots, hitting him in the head and the body, said Pol Lt Watchara Wansantia, duty officer at Muang police station. 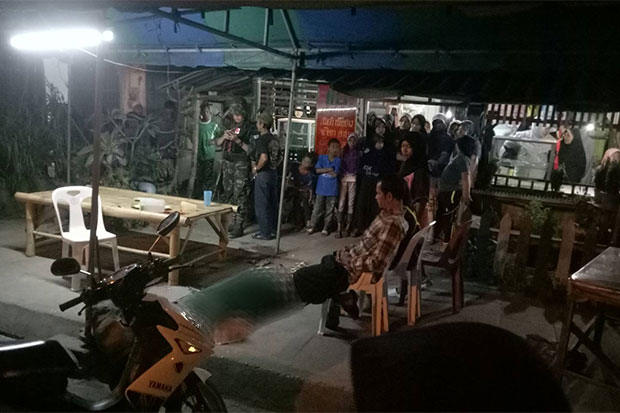 The scene of the fatal shooting of an assistant village headman at a food shop near a mosque in Pattani's Muang district on Monday night. (Photo by Abdulloh Benjakat)