US Navy sails in for Cobra Gold exercises
Thailand
General

US Navy sails in for Cobra Gold exercises

As US troops at Sattahip Navy Base unloaded arriving war gear for next week's Cobra Gold joint exercises, others were already at Wat Klong Plu in a Chanthaburi village making friends and helping to build a new school. (Photos via Twitter/@WassanaNanuam)

US Navy ships have arrived in Chon Buri's Sattahip district for the 37th annual Cobra Gold military exercise which will kick off next week.

Taking place from Feb 13 to 23 in the eastern provinces of Chon Buri, Rayong, Chanthaburi and Chachoengsao, the event will see troops from 30 countries taking part or attending as observers, according to the Royal Thai Army.

The US is sending 6,125 soldiers to participate in the exercise while 4,007 Thai troops are set to be involved.

China and India are sending 44 and 23 soldiers respectively to take part in humanitarian assistance and disaster relief exercises while 10 countries, including Australia, Canada, Bangladesh and Nepal, will send two officers each to participate in Multi-National Planning Augmentation Team exercises.

Supreme Commander Thanchaiyan Srisuwan will preside over the launch of the event with US ambassador to Thailand Glyn T Davies at the Royal Thai Naval Air Division at U-tapao naval base in Rayong on Feb 13, sources said.

Cobra Gold is the largest military exercise in the region and is aimed at fostering cooperation between the nations taking part to ensure coordinated responses to major international disasters when they arise in the region.

Cobra Gold 2018 is the 37th year of the annual peacetime exercise, co-sponsored by the United States and Thailand and designed to increase partnerships and security in the region. This year, the focus of the exercise will be humanitarian assistance and disaster relief. 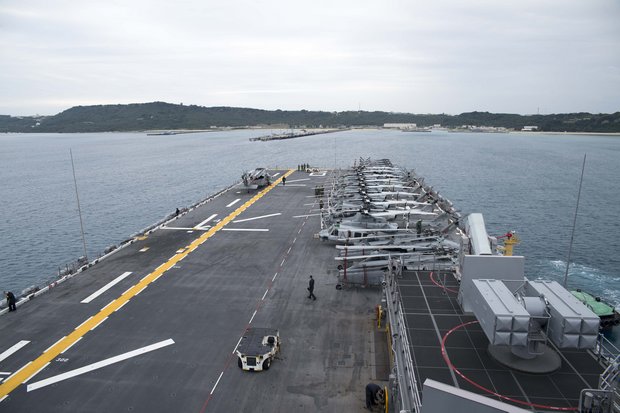 The aircraft carrier USS Bonhomme Richard and a contingent of US 3rd Marine Division troops and gear set sail from Okinawa for Sattahip on Friday. (Photo US Navy)