ITD under pressure over state contracts

Stock Exchange of Thailand-listed Italian-Thai Development Plc (ITD) has been thrust into an unwelcome spotlight as questions have been raised over its corporate governance after the arrest of its president, accused of poaching wildlife in a Kanchanaburi World Heritage sanctuary.

Critics question if the company should be allowed to undertake state construction projects any longer.

Three online campaigns at Change.org have been launched calling for a boycott of ITD, demanding that transparent legal action be taken against hunters in national parks, and particularly so in the case of ITD president Premchai Karnasuta, accused of poaching wildlife in Thungyai Naresuan sanctuary over the weekend.

Social media users shared comments about how upset they feel over the killing of wild animals.

Some Facebook users have changed their profile picture to a photo of an Indochinese leopard and a message that reads: "Don't let me die for nothing."

They apparently want to make sure that wrongdoers in the case face legal consequences and will not enjoy impunity because of their wealth and influence.

Mr Premchai, 63, was arrested in the sanctuary on Sunday night along with three others -- ITD employee Yong Dodkhruea, 65, of Ratchaburi, Nathee Riamsaen, 43, from Nakhon Ratchasima, and Thanee Thummat, 56, from Kanchanaburi.

They were found with the carcasses of protected wild animals, including a 1.48-metre-long Indochinese leopard, a Kalij pheasant and a common muntjac, also known as a barking deer, as well as three long-barrelled weapons and ammunition. The four have been granted bail with a bond of 150,000 baht each. They denied the charges.

As netizens reacted to the bust, some users shared a Facebook post from 2016 featuring a picture of Mr Premchai among other men in a forest. One of the members in the group wrote that they were going hunting in the woods. Two pairs of elephant tusks were also seized during the search. (Photo by Patipat Janthong)

Meanwhile, ThaiPBS shared an audio clip it acquired from a source which is believed to be a conversation while Mr Premchai and his group were in officials' custody.

In the clip a man apparently tries to convince officials to stop the arrest. If you "want anything, I will ask my subordinates to send it over by truck", the man says.

"Firearms will be seized? Hope not. All are registered," the man says, adding he "will ask phu yai [a person with power] to settle this".

Another person in the clip says there should be legal loopholes to get the confiscated weapons back. 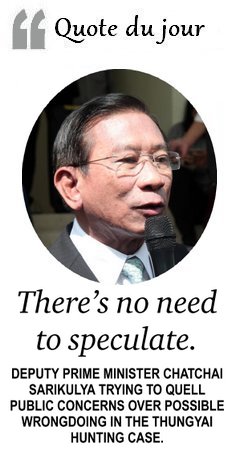 Still, Deputy Prime Minister Wissanu Krea-ngam said Wednesday it was too early to say if the case involving Mr Premchai would have any bearing on ITD's bidding for state projects.

Mr Wissanu said any personal wrongdoings must be separated from company affairs and the matter should be left to authorities to investigate.

Deputy Prime Minister Somkid Jatusripitak said the case will not affect state construction projects which ITD has been contracted to undertake.

ITD has won several state construction projects, including covering parts of the wildlife corridor and widening Highway No.304 which divides part of the world-renowned Dong Phayayen-Khao Yai forest complex.

Meanwhile, police on carried out further probes into Mr Premchai and his group. Police obtained approval from the Criminal Court for the search of his sprawling residence on Soi Soonvijai 3 in Bangkok's Huai Khwang district Wednesday morning and entered the grounds around noon.

The firearms will be sent for examination to determine whether they are collectors' items or had been used as weapons.

Two pairs of elephant tusks with legal ownership registration were also found. No wildlife carcasses or other illegal items were found and no traces of people moving things to escape detection were identified. Withoon Yimprai, Mr Premchai's lawyer, was present during the search. 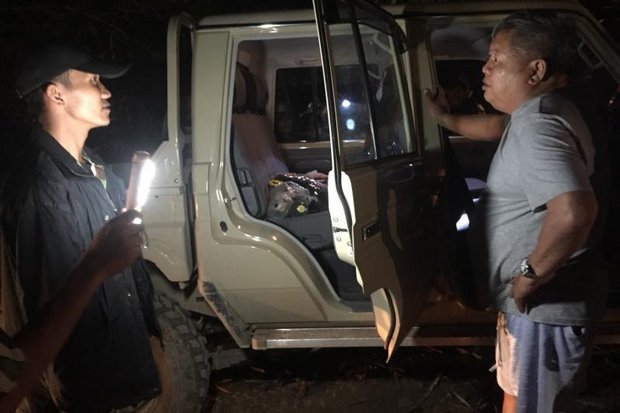