The 2018 ratings put Mahidol as the top Thai university but dump Chulalongkorn to just No.3. (File photo)

Most of Thailand's top universities plunged in the 2018 Asia University Rankings released Wednesday by Times Higher Education (THE) magazine.

Seven of 10 Thai prestigious universities scored lower than last year, two secured the same ranking, while only one advanced. (Full rankings below)

THE Asia University Rankings based the assessment on 13 indicators, such as research performance (volume, income and reputation), teaching and learning environment, and citations (research influence). This year's rankings includes 359 universities in 25 Asian countries.

Chulalongkorn University, the oldest university in Thailand, slid from the 151-160 band to 164th. King Mongkut's Institute of Technology Ladkrabang fell to 201-250, from the 181-190 group.

King Mongkut's University of Technology Thonburi went down to 114th from the 101-110 band.

King Mongkut's University of Technology North Bangkok was relegated to the 301–350 band this year, down from the 251+ division a year earlier.

"The decline of several Thai universities in the rankings is worrying," said Phil Baty, THE's editorial director of global rankings adding the country needs to drive up research capacity.

The demographic shift factor as part of an ageing society played a role in the tumbling ratings. Thai universities are faced with oversupply in higher education and lower attendances.

"The nation must find ways to stem large falls in student enrolment, potentially by attracting more students from overseas or by merging or closing institutions," he said.

Among 350 universities in the survey, 63 are from China, many of which have made progress this year, including several of its lower-ranked institutions.

Mahidol University now stands as the top-ranked Thai institute on the list -- maintaining 97th place from one year earlier.

Suphat Champatong, secretary-general of the Office of the Higher Education Commission (Ohec), said the agency has already set up a 10-year plan to help the country's top six universities obtain a better ranking on the regional and global stage.

Under the plan, six leading universities will receive more budget from Ohec to increase their spending on research and development.

Most of universities in the top 10 are from East Asia, with the exception of Singapore.

The National University of Singapore is ranked first among Asian universities. 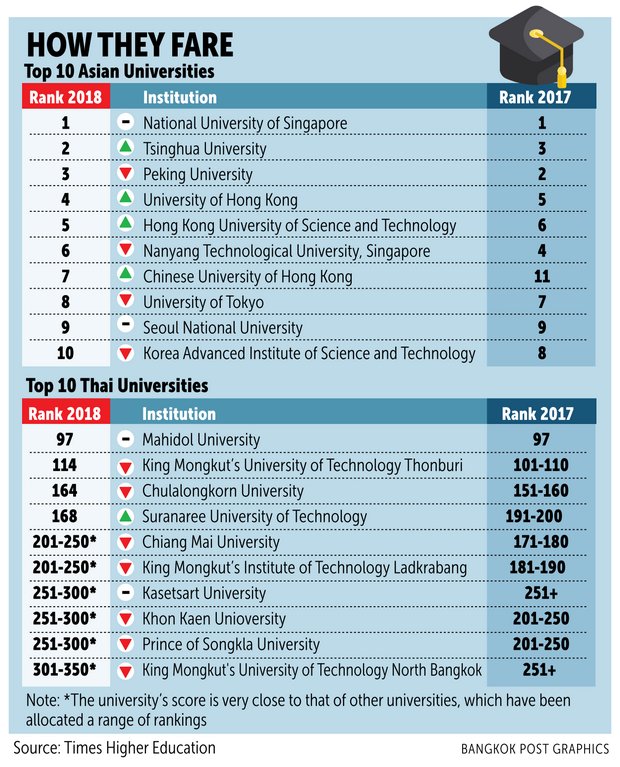