Park rangers found this carcass of an endangered black leopard near the camp of Italian-Thai Development president Premchai Karnasuta in the Thungyai Naresuan Wildlife Sanctuary in Kanchanaburi province when he was arrested on Sunday. (Photo supplied by the sanctuary management)

Police have found a bullet hole in the dead endangered black leopard and shotgun pellets in the protected pheasant found at the illegal campsite of construction tycoon Premchai Karnasuta in a Kanchanaburi forest reserve.

They are now looking for anyone who may have allowed the leading businessman's group to illegally enter the wildlife sanctuary.

The black leopard had a wound indicating a bullet pierced its back and exited through its neck. It was still not known what type of bullet.

They were also looking for more weapons that might be hidden there.

The case was not complicated. Investigators were awaiting the results of relevant tests on collected samples, Pol Col Wuthipong said.

Deputy national police chief Srivara Rangsibrahmanakul said on Thursday that police would question park rangers who were on duty during the visit by Mr Premchai and three others to the wildlife sanctuary.

Another source said police also hoped to learn if anyone had turned a blind eye or in any way facilitated the visit.

Pol Gen Srivara said police would check some audio clips to see if there was an attempt to bribe an official and they would also check the legality of elephant tusks found at Mr Premchai's house in Bangkok.

Police doubted the tusks belonged to local elephants. If they did not, their possession would be illegal, he said.

Mr Premchai, 63-year-old president of Italian-Thai Development Plc, was arrested along with two ITD employees and another man in a no-camping area in the wildlife sanctuary Sunday with long-barrel guns, ammunition and carcasses of a barking deer, the Kalij pheasant and the black leopard.

They allegedly hunted wildlife and did not receive permission to enter the World Heritage forest. 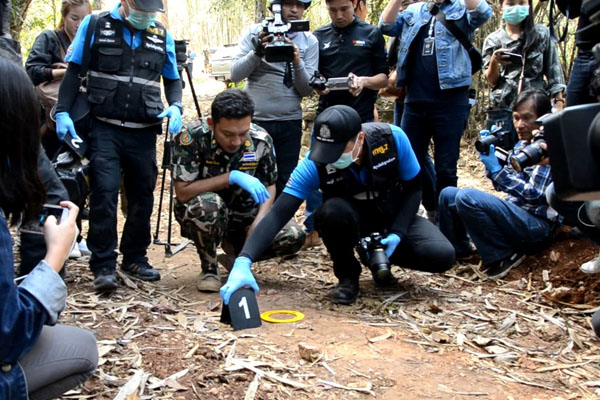 Forensic science police at the forest camp site of Mr Premchai in Kanchanaburi on Wednesday. (Photo by Piyarach Chongcharoen) 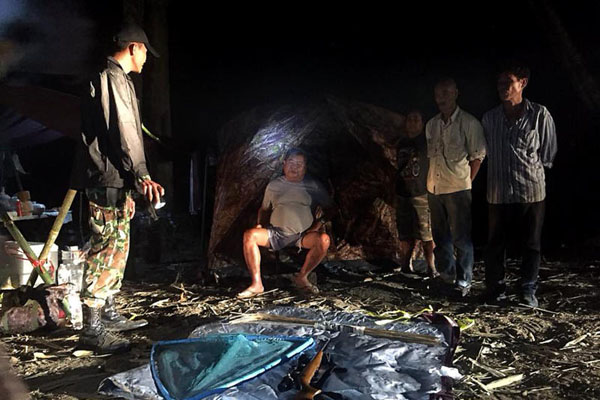 Premchai Karnasuta, sitting, and three others are arrested in the Thungyai Naresuan Wildlife Sanctuary in Kanchanaburi on Sunday. (Photo from Khon Anurak's Facebook page)