During a three-day visit to Thailand, Sen Gen Min Aung Hlaing, Myanmar Commander-in-Chief of Defence Services, talked to reporters Wassana Nanuam and Kornchanok Raksaseri on the occasion of his receiving a second royal decoration from Thailand, the Knight Grand Cross (First Class) of the Most Exalted Order of the White Elephant.

How do you feel to have received the royal decoration?

I have received the royal decoration because [Myanmar] is a good neighbouring country and the borders are 2,000 kilometres long. We also have similar culture and religion.

The relationship between the two armed forces is quite good. This is why I have received the royal decoration, and I am proud of it.

The military leaders of both countries have been quite close for some years now.

I have had a close relationship with Thai generals starting with [chief of Defence Forces] Gen Tanasak Patimapragorn's predecessor, Gen Songkitti [Jaggabatara].

The one I was closest to is Gen Tanasak [who served in the post between 2011-2014] but I am also close to the others. His successors are Gen Worapong [Sanganetra] and Gen Sommai [Kaotira] then Gen Surapong [Suwana-adth] and the current chief, Gen Thanchaiyan Srisuwan].

The relationship between the two countries constantly develops.

The exchange of visits of leaders of the armed forces occurs often, especially Gen Tanasak visiting Myanmar, and I also come to Thailand often.

Would you consider the relationship in the manner of friends or brothers?

Every time we meet, we exchange experiences.

Thailand is experienced in democracy and has passed so many things. 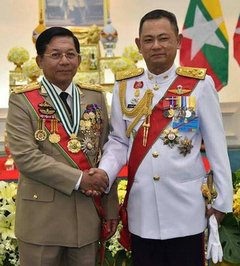 The good things in this era contributed to the changes in Myanmar's democracy.

The democratic process in Myanmar took place at the same time as the exchanges of experience.

The closer [the military leaders became], the more open the discussion between us.

Thailand is also in the process of going back to democracy at the moment. What can we learn from Myanmar? What is your advice?

Each country's democracy has a different background. Myanmar's background of democracy is one thing. Thailand's democracy is different. We can only make use of good things we can apply but we cannot say whose lessons should be applied to whom. In fact, a democracy or political system needs to be stable and not shaken. If it's stable, the people will have confidence and live happily.

How will the countries cooperate in the future?

In many ways; so many.

Will there be joint training?

It depends on limitations and readiness. I cannot say right now. But I can assure there will be more cooperation.

How is the cooperation going on along the border?

We currently cooperate to fight drug problems. But drugs are not just an issue for Thailand and Myanmar but also a regional problem. It must be cooperation among every country in the region. In fact, we have to collaborate to prevent our children from being slaves of drugs. We have to prevent the problem from growing too. Every country must make drug eradication its first priority as drug producers never think of society but only their own interests.

Recently you have reached a national ceasefire agreement. What is the latest situation of peace along the border?

My sincere intention is permanent peace along the Thai-Myanmar border. We will promote peace within Myanmar. While we were creating peace in Myanmar, Thailand also cooperated.

Did Thailand help during the peace talks?

No, just cooperation, not assistance, but that's part of the promotion of peace in Myanmar.

How do you feel to be an adopted son of Privy Council president Gen Prem Tinsulanonda?

During the time when Gen Tanasak was the defence chief, he gave me a chance to pay respects to Gen Prem who is the same generation as my father. When we met, we had an exchange of experiences, of being leaders. He [Gen Prem] gave me advice. Being like father and son is very good and makes things better in many ways.

Do you have anything about the international community's criticism of Myanmar over the problems in Rakhine state?

I would rather not talk about it. But I will only say that I will do my best to take care of the problem. Furthermore, in Myanmar, there is no ethnic group called Rohingya. They are Bengalis who came from somewhere else. We will follow the laws. Now we are closely in touch with the Bangladeshi government.