Harpreet Singh, 53, (second from left) speaks to the police during the raid on his home in Soi Sukhumvit 39 on Tuesday morning. He was arrested on suspicion of financing drug traffickers. (Photo by Pornprom Satrabhaya)

A Thai-Indian businessman was arrested on Tuesday morning on suspicion of financing major local and transnational drug-trafficking networks, as associated raids were carried out on 30 premises nationwide, police said.

Harpreet Singh, wanted in connection with the seizure of 400 kilogrammes of crystal methamphetamine and arrest of several suspects on July 28 last year, was apprehended at his home on Soi Sukhumvit 39 in Watthana district of Bangkok.

Police teams raided 30 locations nationwide on Tuesday morning, three of them directly linked to Mr Harpreet, according to deputy police chief Chalermkiat Srivorakhan, who led the 5.30am arrest at the suspect’s home.

He said police had evidence that Mr Harpreet was financing at least 12 drug suspects arrested previously.

Mr Harpreet’s financial transactions showed he had transferred at least 3 million baht to businesses linked to these suspects.

The investigation was being expanded to include drug networks in Thailand and some neighbouring countries believed to have also been financed by Mr Harpreet, Pol Gen Chalermkiat said.

The suspect had not directly dealt in drugs, which explained why no drugs were found at his home during Tuesday’s raid, he said.

Mr Harpreet had denied the allegation of financing criminal activities, but police had solid evidence that he had transferred money to cover the cost of buying cars used in drug trafficking, Pol Gen Chalermkiat said.

The evidence was presented to the court when police requested and obtained a warrant for his arrest, the deputy police chief said.

About 160 million baht worth of Mr Harpreet's assets were also seized for further investigation. 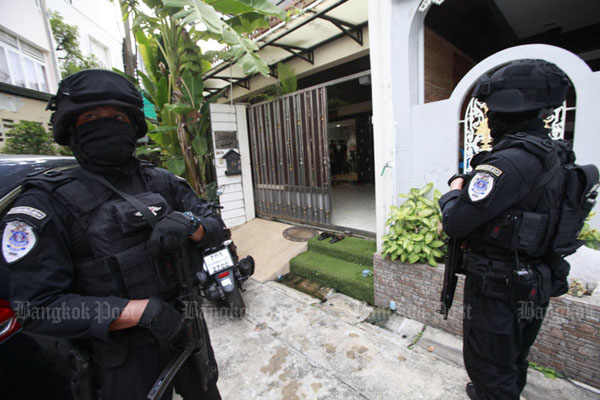 Police commandos guard the entrance of the suspect's house on Soi Sukhumvit 39 in Thawi Wattana district on Tuesday. (Photo by Pornprom Satrabhaya)