Downpours pounded the capital from about 5.15am and continued until late Friday morning.

A section of an expressway heading to Sathupradit Road was also inundated this morning, the traffic radio station reported.

Floodwater rose to foothpath level on Chan Road in Sathon district and Charoen Nakhon Road in Khlong San district, causing traffic woes in the area and nearby roads.

The downpours also spread over the surrounding provinces of Nonthaburi, Samut Prakan and Pathum Thani.

The Meteorological  Department forecast more summer storms with heavy rain, gusty winds and some hail in the North, the Northeast, the East and Central regions, including Bangkok and its vicinity through into Saturday.

A high pressure system continues to cover the Northeast of the country, where temperatures remain high, the department said on Friday. 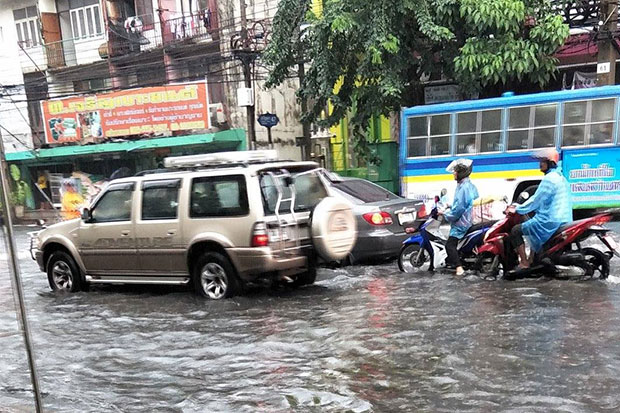 Charoen Nakhon Road turns into a sea of mud as heavy rain ravages many areas in Bangkok on Friday morning. (Photo from TuaNga @TuaNga via fm91trafficpro Twitter account) 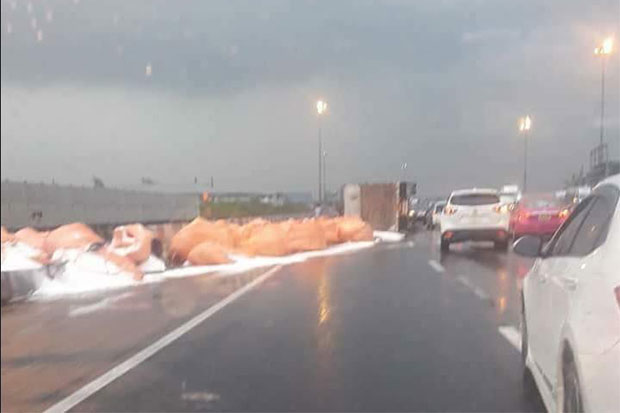 A truck carrying big sandbags overturns on Bang Phli-Sukawat expressway after the driver lost control during the flooding.  No injured were reported in the accident that threw out over one tone of big sandbags from the truck on the expressway section before the Pak Nam exit gate.  (Photo from Vichai Chumphon via fm91trafficpro Twitter account)

Ekachai-Chomthong Road on Thon Buri side of Bangkok