Prosecutors have been requested for indictments for 15 men including top-flight footballers, referees and a club director on suspicion of match-fixing in the domestic league.

Led by national police chief Chakthip Chaijinda and his assistant, Pol Lt Gen Manu Mekmok, a team of 10 officers turned up at the Office of the Attorney-General Tuesday to submit a 3,000-page investigation report to prosecutors.

Police said they decided to seek indictments against the men in connection with irregularities that occurred in Thai League T1 from July to September last year.

Another man believed to be connected with the case has not been charged, they said.

Another five are believed to be financial sponsors who may have been involved in the match-fixing: Si Sa Ket team director Cherdsak Boonchu, Wallop Saman, Kittiphum Paphunga, Manit Komolwatana and Phakphum Pannikul.

All of the suspects reported to prosecutors Tuesday. The Department of Special Litigation 6, which is in handling the case, has ordered them to report to the office again on April 24.

Police carried out the probe after the Football Association of Thailand (FAT) lodged a complaint about suspected match-fixing in the Thai League, Pol Gen Chakthip said.

This is the first time police have concluded and forwarded the results of an investigation to prosecutors since the Professional Sports Promotion Act came into force in 2013.

Officers conducted the probe without fear of influence by more senior personnel, the police chief said, adding that club owners may not have known their players were cheating.

Pol Lt Gen Manu, who led the investigation, said the suspects have denied the allegations but described the report as "watertight". 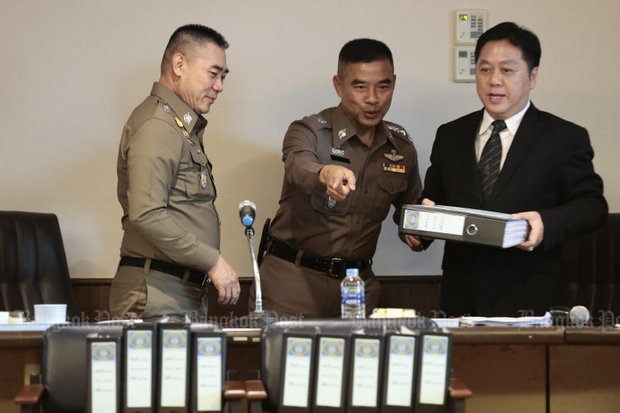 Pornchai Chonwanichkul, deputy director-general of the Department of Criminal Litigation, said police and prosecutors teamed up to examine evidence, which pointed the finger at gamblers. They said they have uncovered most of the money trail in the case.

Prosecutors will look into the police report and, if it lacks weight, more probing will be done, Mr Pornchai noted.

The arrests marked the first serious crackdown on cheating in Thai football.