Stray dogs are being killed outright in the South in a misguided 'war on rabies', according to witnesses at Nakorn Si Thammarat. There also have been public protests against the killing. (Photo FB/watchdogthailandpage)

Ignorance, sensationalist reporting and populist posturing by officials have contributed to distorted information about the recent prevalence of rabies, say advocates for animal welfare, leading to unnecessary slaughter and promotion of policies likely to spread the disease.

The six deaths recorded in the first 11 weeks of 2018 mark an uptick – but hardly an epidemic, and a small fraction of the rate in previous decades. To give some perspective, while six people died of rabies in Thailand this year, around 4000 died in road accidents. 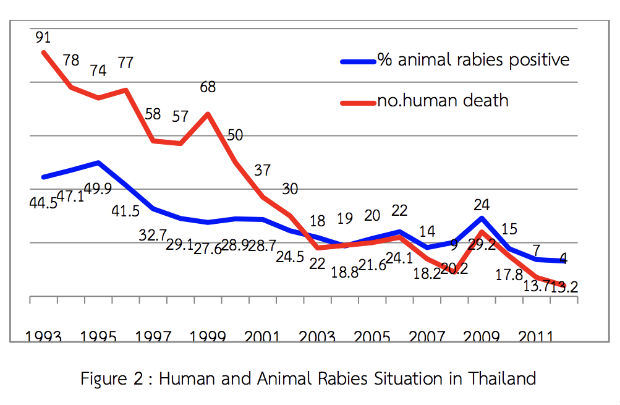 Before a Wednesday rally at the Department of Livestock Development (DLD) in Bangkok, Watchdog Thailand legal assistant and veterinarian Pattaranan Sajarom said, “We believe the DLD wants to eradicate stray cats and dogs and take the opportunity of rabies zone declarations to round them up and take them away – which is not an appropriate solution for Thai society.”

“Some people are now advocating what has been described as “Set Zero”, a massive country-wide slaughter or impounding of all stray dogs, so that the streets will be “safe” again, wrote John Dalley, co-founder of Phuket-based Soi Dog Foundation.

“Thailand has at least eight million stray dogs. Could they all be slaughtered? Most unlikely and, even if they could be, try to imagine the global outcry at a predominantly Buddhist country, with its respect for life, introducing such a policy.

“Or could they all be impounded? Where would eight million dogs be locked up and looked after properly until they die of old age?"

Dalley argues that mass slaughter or impounding is not only cruel – it might actually lead to more stray dogs and more rabies cases, because some of the stray dogs being rounded up are already neutered and/or vaccinated.

“You remove dogs from any street by slaughtering or impounding them, they will leave a vacuum that will be filled almost immediately by other dogs from nearby territories wandering in looking for food, water and shelter. Once settled, they will breed.”

To prevent that happening, he argues, you’d have to kill or impound eight million dogs all at once – a practical impossibility.

Neutering and vaccinating stray animals is the only proven, viable solution, says Amy Baron, founder of Paws Bangkok, a non-profit programme that offers free rabies vaccinations by appointment. “Sterilised and vaccinated dogs will protect their territory. Newcomers will not be coming in looking for mates. Gradually, the population will decline.”

That’s what the Soi Dog Foundation claims to have achieved in Phuket, where it says an estimated stray population of 80,000 in 2003 has been reduced to between 4,000 to 6,000 now – and the number of rabies infections to zero. 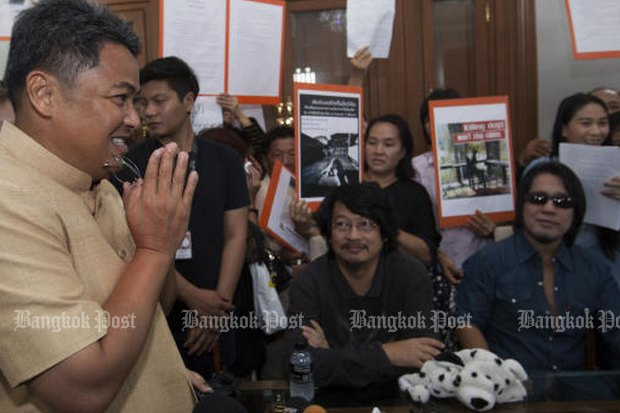 Director-general Apai Suttisunk of the Department of Livestock Development greets members of an alliance protesting what they called 'set zero' government policies to slaughter dogs in order to battle the rabies threat. (Photo by Pawat Laopaisarntaksin)