Two Serbian nationals were yesterday charged with public indecency and fined 5,000 baht each over their taking of inappropriate pictures on the wall of a Phra Ubosot hall in Wat Phra Si Rattana Satsadaram, within the precinct of the Grand Palace, said the Tourist Police Bureau (TPB).

The revealing pictures of Nadica Curcin, 31, posing on the wall of the hall went viral on social media and drew criticism over the two tourists' improper behaviour at the sacred place, which is also known as the Temple of the Emerald Buddha.

The pictures were taken by Vladimir Veizovic, 31, her travelmate.

The outcry led the tourist police to track them down and bring them in to face the charge at the tourist police's subdivision at Suvarnabhumi airport yesterday, said Pol Maj Gen Surachate Hakparn, deputy chief of the TPB.

Ms Curcin admitted to being the woman in the pictures while Mr Veizovic told authorities he was the photographer, police said.

The two tourists explained that they weren't aware their etiquette would cause offence at the time when they took the pictures, nor that they were breaking any Thai laws, said Pol Maj Gen Surachate.

Public indecency is prohibited under Section 388 of the Thai Criminal Code.

Following this incident, tourist police said they have stepped up public campaigns to raise awareness among visitors to Thailand about what they aren't allowed to do while visiting religious or historic places.

In November last year, two American men who posted photos of themselves with their rear ends exposed on their "Travelling butts" Instagram travel page at the capital's famous Wat Arun (Temple of Dawn) were arrested and charged with indecency for their behaviour.

The account, which had about 14,000 followers, was soon deleted after the pair's arrest at Don Mueang airport as they were about to leave the country. 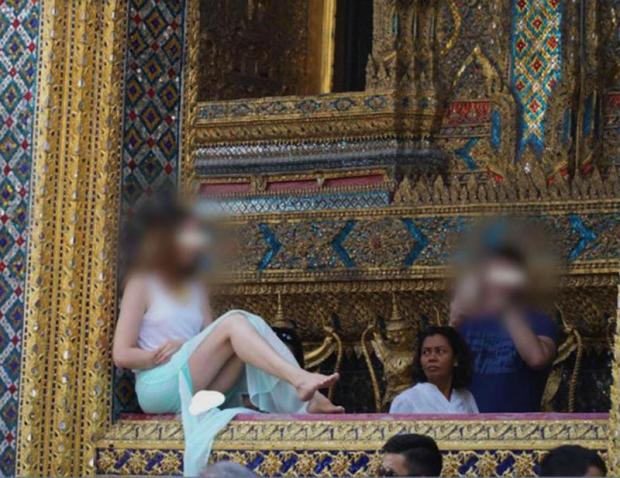