Army chief Chalermchai Sitthisad has given the green light for the construction of the new Region 5 Court of Appeal office and housing for judicial employees at the foot of Doi Suthep National Park in Chiang Mai to continue, saying the project does not encroach on the forest or violate any laws.

Furthermore, the construction has gone too far to terminate it or a lot of money will be wasted, he said explaining that more than one billion baht has been spent on the project since February 2013.

The development in the case of the court's clear-cutting operations came exactly a week after Gen Chalermchai first announced that he had ordered a halt to the construction, after public outrage first surfaced.

The project has drawn fierce criticism from Chiang Mai citizens, who said that it has caused environmental impacts on the forest land.

"The construction is almost done. It's 95% complete, and it will be finished within the next one to two months. When we have examined it and found that everything is in line with the law, we will allow the construction to be completed," he said.

"Construction is well advanced. How can we find a common ground? A considerable sum of money has been put into the project and we still have some time to discuss it. I want local people and authorities to discuss and find a suitable agreement as many stakeholders are involved in Chiang Mai," he said Wednesday, adding the military would help facilitate the talks.

According to Gen Chalermchai, soldiers from the 3rd Army region were sent to survey the site from March 20-24 and a conclusion was reached that the construction is within the 147 rai of land permitted.

Meanwhile, civil networks in Chiang Mai lodged a petition Wednesday with provincial governor Paween Chamniprasart, asking for his help to explain the details of the project.

The group also called on Patchara Anuntasilpa, director-general of the Treasury Department, which manages state land, to consider revoking construction approval and ensuring the return of the landscape to its original state.

Yongyuth Ruangpatarakul, chief of the Treasury Department's Chiang Mai office, said the controversial land was obtained by the army in 1937. The Office of the Judiciary later asked the army to set aside its land for the agency and this was subsequently agreed upon.

The occupier of the land then changed from the army to the Office of the Judiciary, he said.

Gen Chalermchai said the Office of the Chief Justice Region 5 initially requested to use the army land to develop the project in 1997, but this was turned down.

The office however sought a permit again in 2003 and the army gave the green light for it in the subsequent year with the 147 rai of land that was set aside for the construction, while the army returned the land to the Finance Ministry. 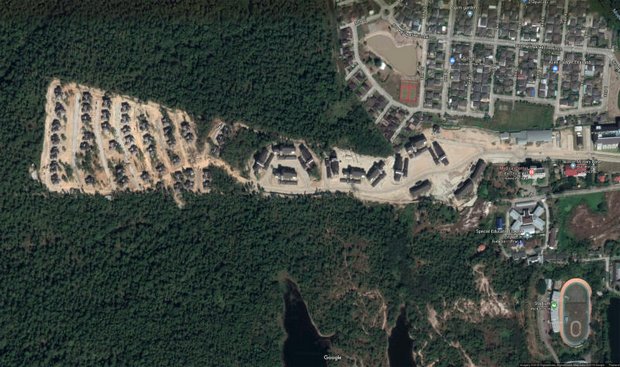 Aerial photo shows the extent of the project. Below: The housing project for staff working at the Appeal Court Region 5 is seen at the foot of Doi Suthep in Chiang Mai’s Mae Rim district. (Photos by Chanat Katanyu, Google Maps) 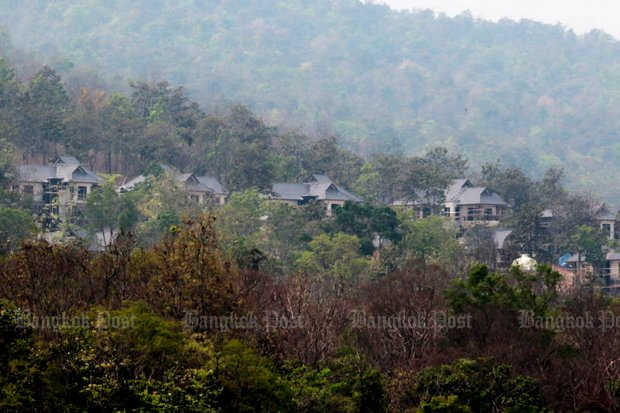