The Department of Special Investigation (DSI) says it did not bring charges against Privy Council President Prem Tinsulanonda, who received a cheque worth 250,000 baht from the owner of a real-estate company implicated in a loan scandal, because the former prime minister only put the sum in his foundation. 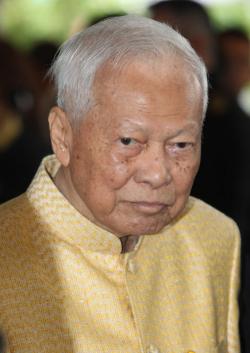 Panthongtae Shinawatra, the son of fugitive former prime minister Thaksin Shinawatra, posted a message on his Facebook account Monday claiming that Gen Prem received the cheque from Krisdamahanakorn, which was tied to a loan scandal involving Krungthai Bank (KTB) 14 years ago.

Mr Panthongtae claimed the money came from the company's owner, Wichai Krisdathanon. He said it was then transferred to the General Prem Tinsulanonda Statesman Foundation.

He also claimed that another cheque with an undisclosed value was deposited in a bank account belonging to ACM Prajun Tamprateep, a close associate of Gen Prem.

Mr Panthongtae said his lawyer had forwarded the copies of the two cheques to the DSI for examination.

Mr Panthongtae and three others have been charged with money laundering after Thaksin's son received a cheque worth 10 million baht and the rest had a hand in 26 million baht tied to wrongfully approved KTB loans.

The KTB scandal involves 9.9 billion baht in loans the state-run bank granted to subsidiaries of Krisdamahanakorn during the Thaksin administration even though the firm was listed by the bank as a non-performing debtor.

Earlier, Mr Panthongtae's lawyer wrote to the DSI, claiming Mr Panthongtae was not aware the 10-million-baht cheque he received from Mr Wichai was part of the fraudulent KTB loan, and he had no intention to conceal the money.

Mr Panthongtae posted that if there are "double standards" against him or unfair treatment, he would defend himself.

DSI chief Paisit Wongmuang said Mr Wichai was found to have signed cheques to many people. The DSI did not bring charges against all the cheque recipients as Mr Wichai also owed other people money, including for his land purchase.

Meanwhile, a DSI source said the 250,000-baht cheque was merely put into the General Prem Tinsulanonda Statesman Foundation and the money was not used for Gen Prem's own purposes.

"The intention is clear that this was a charity donation," said the source.

Referring to the cheque sent to ACM Prajun's bank account, the source said an explanation had been given that the sum was used to organise a banquet for those attending a course at the Thailand National Defence College, adding Mr Wichai earlier asked ACM Prajun to make an advance payment for the event.