An investigation is being carried out to determine the motive and whether the suspect is a soldier.

On Tuesday, Pol Capt Singh Naree, lead inspector of Mai Rud police station, and Capt Kasem Rodjeen, director of the marines of the 532nd regiment, led teams to patrol and inspect vehicles going in and out of Khlong Yai district of Trat.

During the patrol, authorities identified a mysterious four-door Toyota pick-up truck with Bangkok licence plates and a plastic cover over its bed at about 10pm.

Mr Prasertrit, who was from Muak Lek district of Saraburi province, was then told to open the bed of his truck, where a cache of military-grade weapons was found.

Mr Chayut admitted that he was delivering the weapons from a neighbouring country to a customer in Saraburi.

The illegal weapons had reportedly been dropped off in Chalalai Port in Khlong Yai district where he picked them up. Mr Chayut insisted that there was no accomplice, but authorities believe that he is linked to a bigger weapons smuggling operation as he admits he made several runs before.

It has not yet been confirmed whether Mr Chayut is a soldier. 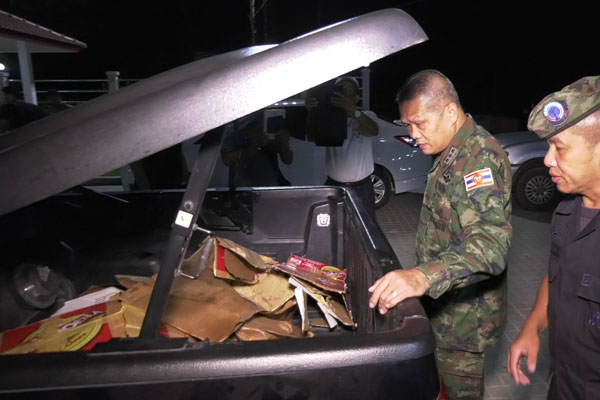 Authorities inspect the truck used to carry the smuggled weapons.