CHON BURI: A Russian man has been apprehended and charged after he allegedly robbed a foreign exchange booth and fled with almost 1 million baht in cash.

Nikolay Rybalov, 32, was arrested by immigration police at Suvarnabhumi airport on Saturday evening as he was trying to leave the country, hours after the robbery at CC Exchange in tambon Na Jomtien in Sattahip district, police said.

Mr Rybalov allegedly attacked staffer Sunee Kaewyoo, 30, before speeding off on a black Honda motorcycle with a bag containing the cash.

Police found the rental vehicle at a house in Bang Lamung district, but said the Russian suspect and his wife, whose nationality was unknown, had left shortly before they arrived.

Immigration police sent the Russian back to Na Jomtien police station for interrogation the same night.

Deputy national police chief Chalermkiat Srivorakhan said on Sunday that during the interrogation, the suspect denied robbery and assault charges and said the cash - in Thai baht and US dollars - was his personal wealth.

Items believed used during the robbery - including the suspect's clothes, motorcycle, gloves and a safety helmet - have been sent to the Institute of Forensic Medicine at Police General Hospital in Bangkok for examination, Pol Gen Chalermkiat said.

Police are expanding the investigation to find out whether his wife was involved in the alleged crime. 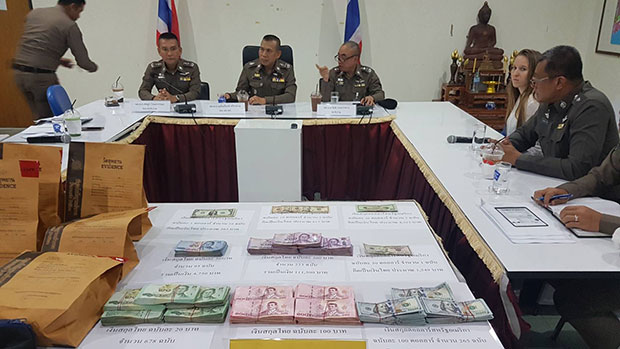 Cash in the Thai and US currencies and other evidence are displayed during a media briefing about the arrest of Nikolay Rybalov. (Photo by Chaiyot Pupattanapong)

Pol Gen Chalermkiat said Mr Rybalov entered Thailand three months ago and rented a house with his wife in Bang Lamung. He said to be a former soldier planning to land a job at fitness centres in Pattaya.

The Russian could have commited the robbery while he was looking for a job and running out of money, the deputy police chief said of a possible motive.

Chatchaya Chaiyayangkoon, who operates the forex booth, thanked police for catching the suspect quickly, although she was unable to retrieve all the money since the suspect had spent it.

The business owner said her employee, Ms Sunee, who is still being treated at Queen Savang Vadhana Memorial Hospital in Sri Racha district. 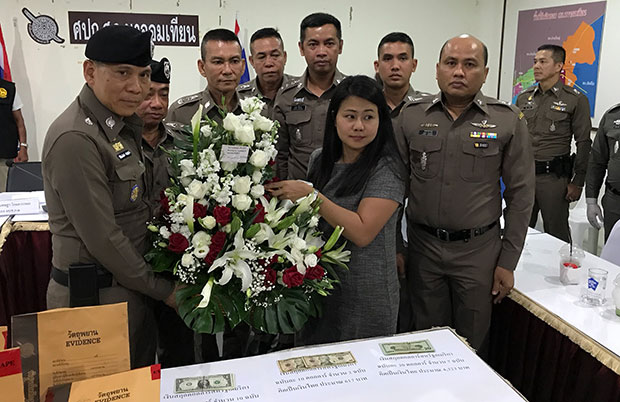