A man died after being hit by lightning while celebrating Sonkgran in Buri Ram during a summer storm on Sunday.

The injured were sent to Non Dindaeng Hospital and one of them - identified as Worawut Boonkong, 24 -later died, police said.

Witnesses in the area said the five were splashing water from a vehicle parked under a big tree during a thunderstorm when lightning struck them.

Buri Ram was one of the provinces affected by summer storms during the Songkran holidays.

The Disaster Prevention and Mitigation Department on Sunday reported 892 houses in 19 provinces in the northern, northeastern and eastern regions had been damaged by summer storms since Friday.

Hailstones as large as one inch in diameter rained down on Ban Phue district in Udon Thani on Sunday, damaging 10 houses.

The Meteorological Department on Sunday said storms would continue in those areas at least until Wednesday. Bangkok and its vicinity should brace for storms from Tuesday, it added. 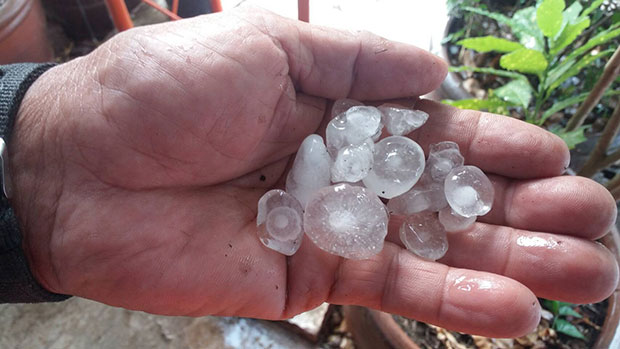 A local resident shows hailstones that fell near his house in Ban Phue district in Udon Thani on Sunday. (Photo by Yuttapong Kumnodnae)