Police and airport authorities on Monday talk to a Japanese passenger claiming she lost 3 million yen in cash from a checked bag on a Thai Airways flight Tokyo to Bangkok. (Photo by Sutthiwit Chayutworakan)

Police and airport authorities are looking for clues after a Japanese passenger claimed that 3 million yen (873,670 baht) in cash was stolen from her on a flight to Bangkok.

Suvarnabhumi airport police chief Viroj Tudso and airport deputy general manager Kittipong Kittikachorn said on Monday that authorities, including representatives of Thai Airways International, are trying to shed light on the claim after the passenger filed a complaint at Suvarnabhumi police station on Monday.

The passenger, whose name was withheld, arrived in Bangkok with her sister on THAI flight TG661 from Haneda airport in Tokyo to Bangkok at 5am on Monday, according to police.

She later found out that money had been stolen from one of her checked bags, as well as a camera in another stowed bag, she said.

The passenger said she planned to carry both bags onto the aircraft but an airline staff member told her that there was no space available and advised her to check them instead. She followed the suggestion but forgot to take out the money and other valuable items.

The money, she told police, was to pay for cosmetic surgery at a hospital in Bangkok.

Pol Col Viroj and Mr Kittipong said all ground staff involved in unloading luggage from the plane to a conveyor belt at Suvarnabhumi had been called in for interrogation and their homes had been searched. But no evidence pointing to the lost money has been found, they said.

Checking CCTV footage at both Suvarnabhumi and Haneda airports had also led nowhere, they added.

Forensic police have collected DNA samples and fingerprints from all workers involved in handling luggage on the flight, which will be kept for further investigation, they said. 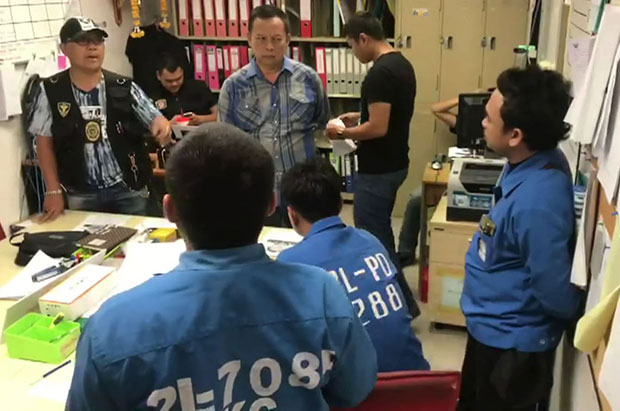 Luggage handlers are interrogated by police at Suvarnabhumi airport on Monday after a Japanese passenger filed a complaint. (Photo by Sutthiwit Chayutworakan)