Lame-duck NBTC board to get Section 44 approval
Thailand
General

Lame-duck NBTC board to get Section 44 approval

Immediately after the closed-door decision was known, the acting board of the National Broadcasting and Telecommunications Commission (NBTC) announced it will go ahead with an important bandwidth auction.

The present board is working in an acting capacity because its six-year term expired in October 2017. The NLA is supposed to recruit candidates for the new board.

The lame-duck board will approve draft terms of reference for the 1800- and 850-megahertz auctions at its meeting scheduled for next Wednesday, aiming to prevent service disruption as the end of the mobile concession on Sept 15 draws closer.

An NBTC source who asked not to be named said the government will invoke Section 44 to cement the authority of the existing NBTC board to carry out critical tasks, including moving ahead with the planned auction.

In addition, the Section 44 announcement is expected to include revised qualifying conditions for the next round of NBTC candidate selection, paving the way for a better crop of individuals to become finalists in the next round.

The NLA decision has forced the selection process to start again from scratch.

After spending more than three hours examining and debating the list of 14 candidates selected previously by an NLA selection committee, the NLA voted 118 to 25, with 20 abstentions, to reject the entire list, said Somchai Sawaengkarn, an NLA member and secretary to the assembly's whip.

The actual meeting and vote was held behind closed doors.

The NLA office announced the names of 14 final candidates last month, out of a total 86 applicants. The NLA was supposed to pick seven to become new board members of the telecom regulator.

The rejection came after at least eight of the 14 final candidates were deemed by the NLA to be unqualified.

They failed to meet requirements of Section 7 of the NBTC law which bars current and former board members, executives or employees of a telecommunication business from selection for the NBTC board, said Mr Somchai.

According to Section 17 of the same law, the selection process now has to begin from scratch as new board members cannot be recruited within a 30-day time frame, he said. 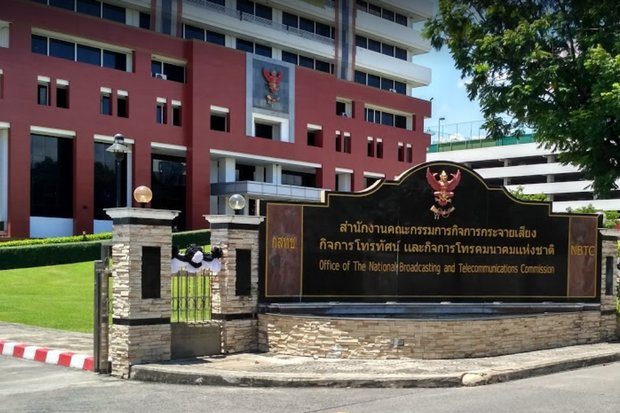 The headquarters of the National Broadcasting and Telecommunications Commission near the Government Complex on Chaeng Wattana Road. The lame-duck NBTC board is likely to get Section 44 approval to remain in office indefinitely. (Photo via Google Maps)

During the debate, NLA member Tuang Anthachai said the assembly should trust the NBTC committee as it was not the responsibility of the NLA to decide which candidates were qualified or unqualified. But the majority of assembly did not agree.

"If the NLA decided to endorse the list and pick seven, legal disputes and lawsuits could have resulted in the future," Mr Somchai said.

Serious tasks lie ahead for the new NBTC board.

It is to consider draft terms of reference for the 1800- and 850-megahertz auctions.

The present board last week agreed not to move on the issue before Thursday and to wait for the NLA vote on the new board members, since they were working in an acting capacity.

NBTC commissioner Prawit Leesathapornwongsa said the existing NBTC board has no choice but to consider the auction draft on April 25 because the issue is critical.

On April 11, the NBTC board suspended consideration of the draft terms of reference for the 1800- and 850MHz auctions, citing the need for approval by the new NBTC board, which was expected to be settled Thursday by the NLA.

The 1800MHz spectrum ranges are operated by Total Access Communication (DTAC) under concessions of state-owned enterprise CAT Telecom. They expire on Sept 15.

The source said the Section 44 announcement may help eliminate any legal backlash against the existing NBTC board's operations during this critical period, especially with regard to the planned auctions.

NBTC secretary-general Takorn Tantasith declined to comment about the possibility of Section 44 being invoked to ensure the full authority of the existing NBTC board.

But Mr Takorn did not deny the need to ease the auction procedure.

The Council of State previously said the existing board does have the authority to conduct the auction but the board members are divided on the issue.

In related news, the NLA voted 117 to 64, with 19 abstentions, against a proposal to approve the selection of Phoranee Leenutapong, a deputy associate judges chief at the Nonthaburi Juvenile and Family Court, as the new Ombudsman.

An NLA source said it was felt Section 202 of the Constitution prevented Ms Phoranee's election. It lists a number of reasons that could have disqualified her.

Reasons range from having doubts over health and ethical standards, said the source.

Hotels, businesses and private hospitals should refrain from offering big discounts to lure tourists and focus instead on attracting the rich, says Anutin.