This stolen ancient brick was sent back to the office of the Ayutthaya Historical Park, together with flowers, candles, joss sticks and a letter of apology saying the sender had mysteriously fallen sick. (Photos by Sunthorn Pongpao)

AYUTTHAYA: The return of an ancient brick souvenired from the famous Wat Chaiwatthanaram in Ayutthaya Historical Park is proof that superstitious belief helps protect the old temple, according to park director Sukanya Baonerd.

The person who stole it admitted the action had brought nothing but bad luck and ill health, Ms Sukanya said on Thursday.

The Thai visitor to the ancient temple had later sent the brick back to the park office, together with flowers, joss sticks, candles and a letter of apology.

"The beliefs of people in our society are not nonsense. If you do not believe that, at least do not look down on it.

"The person who took the ancient brick apparently faced a negative mystical incident. Such beliefs exist in many countries," Ms Sukanya said.

It was posted to inform society that some visitors were inclined to such behaviour, Ms Sukanya said.

Comments from viewers included calls for joint efforts to conserve the nation's heritage, especially from Thai people, she said.

In this case, superstition helped protect the ancient site, not just the law, the historical park director said.

Wat Chaiwatthanaramina is a landmark location in many scenes of the popular TV historical drama series "Buppaesannivas (Love Destiny)". 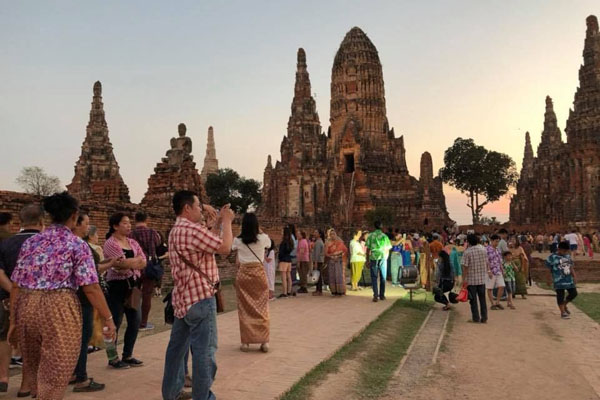 Many visitors to Wat Chaiwatthanaram in Ayutthaya wear  traditional-style clothing, a fashion sparked by characters in the popular TV drama series "Buppaesannivas".