A police officer and bystander view the fallen black cable on Nadee road in Khon Kaen, where the woman motorcylist was entangled and killed on Wednesday. (Photo by Chakkrapan Natanri)

KHON KAEN: Police are investigating to find those responsible for the death of a woman motorcyclist killed when an overhead cable fell and wrapped around her neck on a road in Muang district on Wednesday evening.

Maneenate Charoenngao, 40, of tambon Phra Lap in Muang district, was wrenched off her bike and killed on Lao Nadee road on Wednesday evening.

A blood-stained black cable dangled nearby, and a deep wound was found around her neck after her crash helmet was removed from her head. Her motorcycle was lying on the footpath nearby.

Pattanapong Pusing, 40, who witnessed the incident, told police he saw a black cable crossing above the road fall and catch the victim by the neck as she passed beneath it. The woman was pulled violently off her motorcycle.

He stopped and got out of his car to help, but she was already dead.

He said he had already sent a letter to the Provincial Electricity Authority’s Khon Kaen branch, seeking information about the cables attached to power poles in the area. Police wanted to know what kinds of cables, telephone and others, were strung in the area.

Investigators would call the owner of the fallen cable in for questioning, Pol Capt Singha said.

They would also view closed circuit camera footage to determine whether a passing truck or other large vehicle had caused the cable to tumble down.

Veeradet Sata, director of Kaen Nakhon Witthayalai School, on Thursday allowed reporters to view footage from a camera installed in front of the school.

It showed the victim riding her bike in the left lane on the school-side of the road and a 10-wheel truck with a man sitting on the top passing in the opposite direction.

The truck hit an overhead black cable, causing it to fall to the road at the same time the woman motorcyclist arrived at the spot. It wrapped around her neck, pulling her off the bike.

The riderless motorbike ran up onto the footpath before crashing to the ground.

Kanokwan Panyapim, 21, daughter of the victim, said her family would fight to the end to bring to task those responsible for the death of her mother. She was speaking at the funeral rites of her mother at Wat Pa Thepnimit Wanaram in tambon Phra Lap. 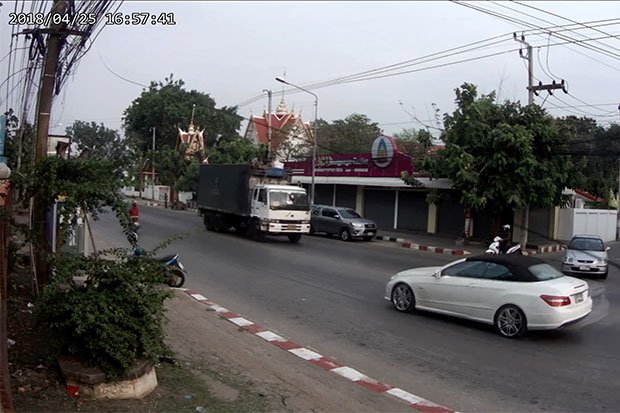 A passng truck knocks the cable to the ground on Nadee road in Khon Kaen. (Footage from CCTV) 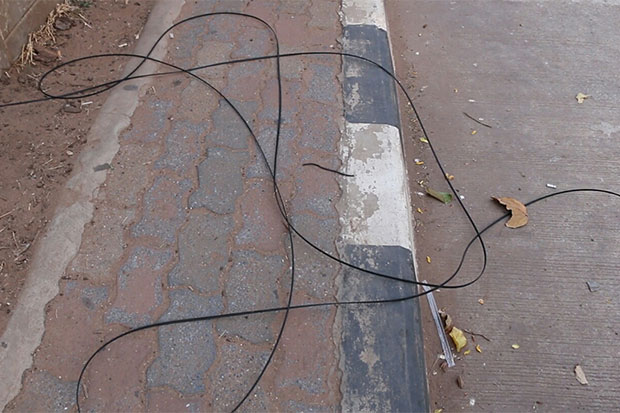