A fire is seen from the compound of Dinosaur Planet on Sukhumvit Road on Friday. (Photo from @fm91trafficpro Twitter account)

A fire broke out at Dinosaur Planet on Friday afternoon as workers were tearing down the amusement park, which closed its doors to the public last month, on Sukhumvit Road in Bangkok.

Traffic Police reported on the @fm91trafficpro Twitter account that the fire began around 3pm and pictures on several Twitter accounts showed black smoke billowing into the sky.

Firefighters put out the fire about 20 minutes later, it added.

Police at Thong Lor station are investigating the cause of the blaze. No injuries have been reported.

It was the second fire at the park, located between Soi Sukhumvit 22 and 24. The first was in April 2016.

Dinosaur Planet closed on April 20 this year after two years in operation. 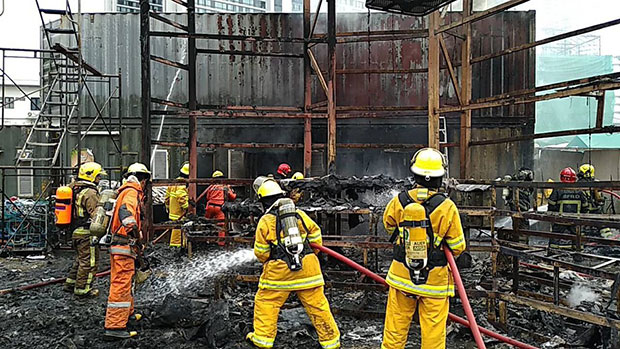 Firefighters douse down the embers after extinguishing the blaze at Dinosaur Planet on Friday afternoon. (Photo from @fm91trafficpro Twitter account)