A photo grab from one of the videos shows a young nursing aide at a home for the elderly shouting the insulting words of a song on her phone music app, ridiculing the unconscious elderly patient. (Photo grabbed from a clip by Guntapon Jirasuvinai via Hot News Thailand Facebook page)

Two assistant nurses at a home for the elderly who used a recording on a music app to ridicule an unconscious elderly patient have lost their jobs after two online video clips of the incident drew the ire of netizens.

Ban Jaikuah Home for the elderly, which has branches in Nonthaburi and Bangkok, issued a statement on Wednesday night expressing its regret over the inappropriate conduct of two female assistant nurses on May 16.

The management apologised to the family of the patient and the public.

Ban Jaikuah had decided to terminate the employment of the two staffers, effective 7pm on Wednesday, the statement said.

The two nursing aides' names were not given, but they are around 20 years of age. They were pelted  with criticism after two video clips featuring them ridiculing an elderly woman resident were posted on the Facebook page Guntapon Jirasuvinai.

The clips were later deleted, after the two young women apologised to the patient’s family and the public - and were sacked.

In one clip, a young woman in a nurse's uniform is seen repeating the words being played on a phone app. She is leaning in close to the unconscious elderly patient's ear and repeatedly shouting ‘’go eat s**t’’, in a supposedly funny skit.

The other clip showed the two assistant nurses dancing to music in the patient’s room.

The statement issued by the Ban Jaikuah Home for the elderly: 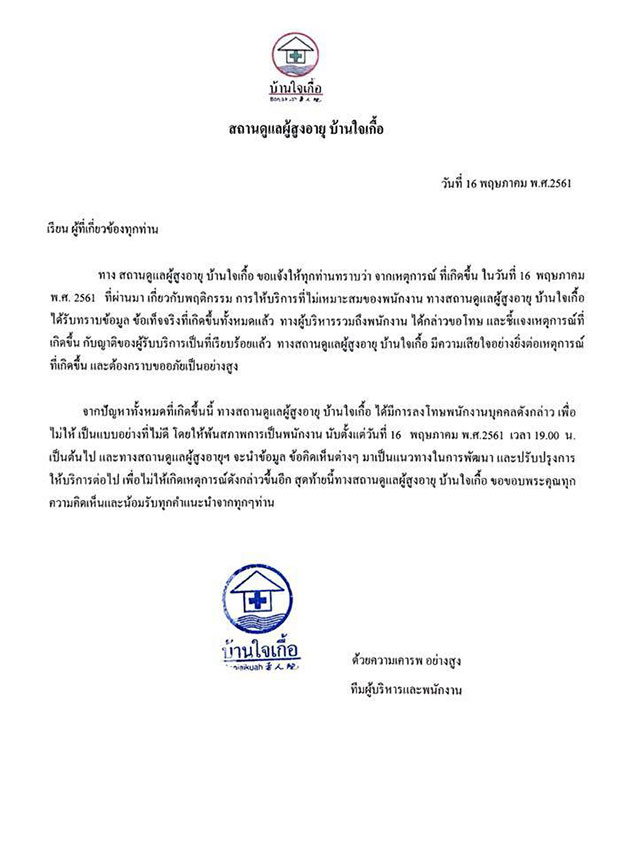 Ban Jaikuah home for the elderly statement announcing the termination of the employment contracts of two female assistant nurses over the May 16 incident. (Ban Jaikuah Facebook page)

AIS Fibre has launched the country's first high-performance router that is able to provide a speed of 2 Gbps through LAN to cater for customer demand and improve the customer experience.

Police have found more clues to suggest that an unidentified Lao woman whose body was found stuffed inside a suitcase in the Mekong River on Sept 28 was killed in Laos.

PARIS: Manchester United avoided further embarrassment after their humiliating defeat to Manchester City by coming from behind to beat Cypriots Omonia Nicosia 3-2 in the Europa League on Thursday, while Premier League leaders Arsenal eased past Bodo/Glimt.