Weapons seized from a house owned by an army lieutenant during a raid in connection with the temple fund embezzlement scandal. Patipat Janthong

A maid detained in a recent raid on a house owned by an army lieutenant in Bangkok's Saphan Sung district has admitted being used by one of her employer's relatives in what police described was an act of money laundering involving 25 million baht from the temple fund scandal.

Nuchara Sithinok, 32, who works part-time at the house owned by Lt Thitithat Niphonphitthaya, who is attached to the Armed Forces Security Centre, admitted being asked by one of his female relatives to open a bank account to receive a transfer of 25 million baht from a well-known temple in Bangkok, Crime Suppression Division commander Maitree Chimcherd said.

Ms Nuchara told investigators the relative had taken her to meet a senior Buddhist monk at the temple who appeared to be very close to the woman. The purpose of the temple visit was to discuss the transfer of the 25 million baht from the temple to her account. She was told to later withdraw the money for the monk, Maj Gen Maitree said.

The maid confirmed the cashier's cheque used in the 25 million baht transfer bore the name of the senior monk, he said.

Despite her just being a grilled meat ball vendor and a part-time maid at Lt Thitithat's home, Ms Nuchara's name was also used on the registration of a firm hired sometimes to work for the same temple, Pol Maj Gen Maitree said.

The company's registered address was that of the raided house, he said.

Investigators at this point are treating Ms Nuchara as a witness and believe she is innocent, but believe the real suspect behind the money laundering is Lt Thitithat's relative who was hired on occasion to do public relations work for the temple, he said.

Police had information that the woman recently accompanied the senior monk on an overseas trip, said Maj Gen Maitree. Seized for examination during the raid were three shotguns, one rifle, 18 pistols and more than a thousand bullets, he said.

Deputy national police chief Srivara Ransibrahmanakul said a preliminary check found all the seized guns are legal products but police are probing further to see if they are owned lawfully. 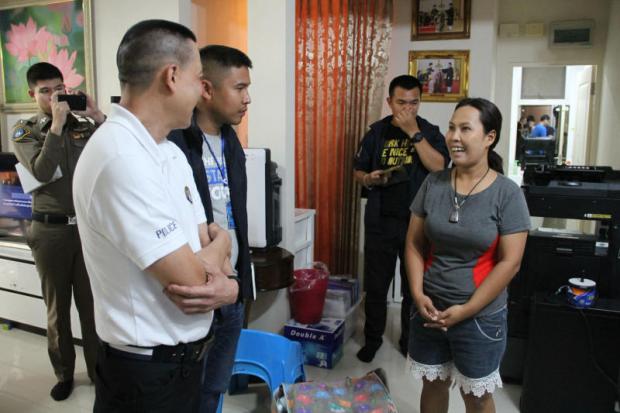