A French cybercrime gang leader wanted for hacking into customers' accounts at a bank in England and demanding a ransom was caught in Koh Samui district, Surat Thani, early Friday morning.

The team, led by Pol Col Phumin Poompanmuang, commander of sub-division 5 of the CSD, found and detained the wanted crime boss, Jonathan Verron, 25, in a house at tambon Mae Nam in Koh Samui district around 5am on Friday.

They also seized compressed marijuana,  computers, mobile phones,  Jonathan Verron, 25, in a house at tambon Mae Nam in Samui district around 5am on Friday.

Mr Verron is wanted for major cybercrimes in France. He allegedly hacked into the financial details of customers at a bank in the United Kingdom and demanded a ransom from the bank in exchange for not disclosing the information.

He is one of three suspects in the case. French police earlier apprehended two of them.

The suspect is also allegedly involved in selling illegal goods such as drugs and firearms through an internet website.

Since fleeing France he had been hiding in Thailand for about the last two years, police said.

The suspect was initially being held in police custody on Koh Samui on a charge of marijuana possession.

Police said he would later be handed over to the Office of the Attorney-General for extradition to France. 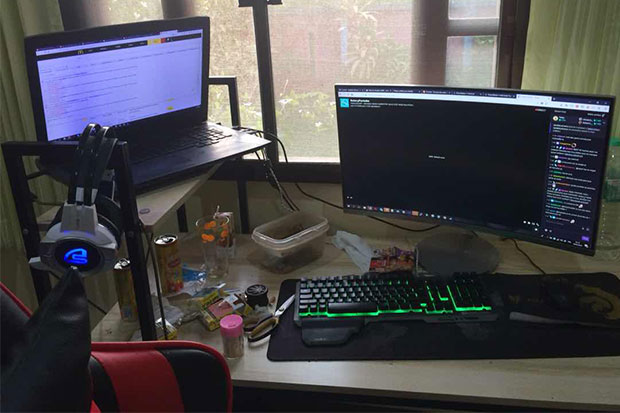 Computers and other electronic equipment seized from the house where French suspect Jonathan Verron was caught on Friday morning. (Police photo via Wassayos Ngamkham)