A tour bus catches fire shortly after entering an expressway in Phra Khanong district of Bangkok on Saturday afternoon, forcing more than 30 tourists to flee. (Photo from @fm91trafficpro Facebook page)

A bus carrying Taiwanese tourists caught fire at an expressway entrance in Phra Khanong district of Bangkok on Saturday afternoon, sending more than 30 occupants fleeing in panic. No injuries were reported.

The bus, belonging to YSK Transport Co, caught fire at around 1pm shortly after entering the inbound Chalerm Mahanakhon expressway in Bang Na, about 200 metres from the Sukhumvit 62 toll gate, at around 12.45pm, Thai media reported.

Fire trucks were deployed to the scene to combat the flames which spread quickly but were soon extinguished. The bus was badly damaged.

Bus driver Peerapong Rompakdi, 43, said he had picked up the Taiwanese group from a hotel in Samut Prakan to take them shopping at the Chatuchak Weekend Market when some passengers complained about a burning smell, Thairath Online reported.

He then parked the bus along the roadside, about 200 metres from the Sukhumvit 62 tollgate, and saw flames engulfing the luggage compartment. He immediately shouted to ask a tour guide to tell tourists to leave the bus.

Many tourists burst into tears as their belongings were burned.

Police are investigating the cause of the fire. 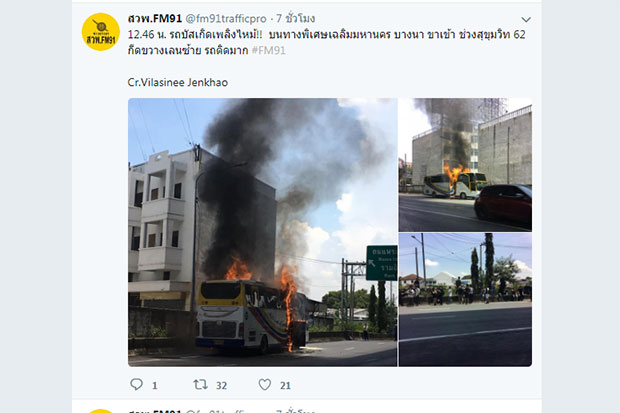 A tour bus is engulfed in flames on the Chalerm Maha Nakhon expressway in Bang Na, Bangkok on Saturday.  (Photo from @fm91trafficpro Facebook page)