Phra Buddha Isara follows an official to a vehicle of the Special Remand Prison after he was disrobed at the Criminal Court on Thursday. (Photo by Apichart Jinakul)

Phra Buddha Isara ended his monkhood and was immediately whisked away by authorities to jail on Thursday after the Criminal Court rejected his bail request.

Section 29 of the 1962 Sangha Act stipulates a monk who has been arrested in a criminal case must be disrobed before being put behind bars.

Three senior monks from Wat Samian Nari representing the National Office of Buddhism Office (NOB) and three NOB officials were despatched to the courthouse to defrock the former abbot of Wat Onoi before corrections officials accompanied him to the Special Remand Prison for detention.

The end of his religious life began after the court rejected his bail request due to the seriousness of the allegations. The court was concerned that his temporary release could lead to evidence tampering. The court spent four hours considering the bail petition before coming up with the decision.

His disciples, however, pledged to continue efforts to help him, saying they will try to submit another bail request on Friday.

The activist monk was best known for his role as a co-leader of the now-defunct People's Democratic Reform Committee (PDRC). During the group's operation Bangkok Shutdown aimed at ousting then prime minister Yingluck Shinawatra, he was in charge of the protesters occupying Chaeng Wattana Road.

He was earlier charged with supporting robbery during the protests on Feb 10, 2014 and taken from the temple in Kamphaeng Saen district in the central province to the Crime Suppression Division (CSD) during a pre-dawn raid by CSD commandos.

A more serious charge on lese majeste was added on Thursday. He was accused of using the late King Bhumibol's signature without authorisation in making amulets on Aug 15, 2011.

Phra Buddha Isara, 59, now has to return to use his layman name, Suvit Thongprasert.

Clad in white, the former monk walked past his supporters who were in tears after seeing him in a layman's outfit.

He is being detained for 12 days starting on Thursday but the court still allows him to reapply bail requests during the period. 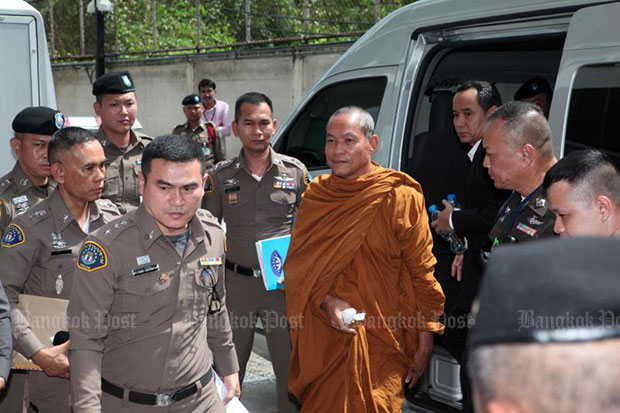 Phra Buddha Isara arrives at the Criminal Court from the Crime Suppression Division after he was charged by police. (Photo by Apichart Jinakul)