Phra Buddha Isara among those nabbed

The former Phra Buddha Isara, now a defrocked layman, and other monks have been denied bail under laws meant to keep mafia-type figures from intimidating or harming possible witnesses. (Photo by Apichart Jinakul)

Six senior monks including well-known activist monk Phra Buddha Isara have been defrocked after they were denied bail in court, resulting in them being sent to jail following their arrest Thursday.

Some 200 police commandos made coordinated raids on temples and arrested senior monks for alleged embezzlement, including members of the Sangha Supreme Council, as well as Phra Buddha Isara.

At Wat Or Noi in Nakhon Pathom's Kamphaeng Saen district, police arrested abbot Phra Buddha Isara, who gained notoriety for his support of the Bangkok Shutdown movement in 2013-14, led by the then People's Democratic Reform Committee (PDRC) seeking to oust the Pheu Thai Party-led administration at the time.

He is the subject of an arrest warrant issued by the Criminal Court on charges of ang-yee (running an illegal secret organisation), and forging royal names.

The case against Phra Buddha Isara relates to a group of anti-Yingluck Shinawatra government demonstrators he led which robbed Special Branch police of guns during their protest on Feb 10, 2014.

Investigators took the monk to the Criminal Court to seek approval for an initial 12-day period of detention. Police opposed bail.

After the court approved the detention request, the National Office of Buddhism (OB) asked three monks from Wat Samiannaree to perform the defrocking of the monk at the court.

After leaving the monkhood, the 59-year-old former monk, who is now known as Suwit Thongprasert, dressed in white, was escorted to the Bangkok Special Remand where he will be detained.

Monks who are sent to jail have to leave their monkhood first.

Devotees said that they intend to apply for bail for the former monk Friday. 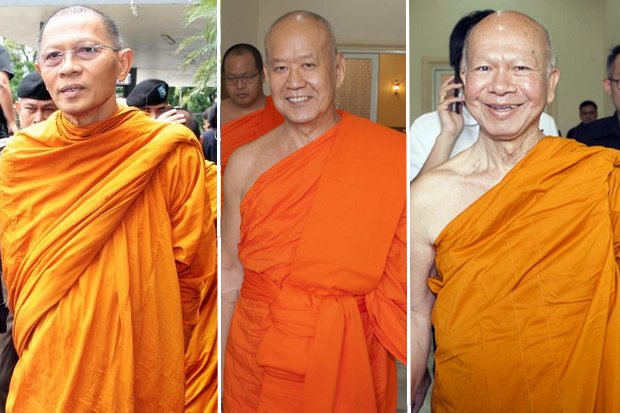 Forces from the Crime Suppression Division (CSD) had search and arrest warrants for the 6am raids at Wat Sam Phraya, Wat Sa Ket and Wat Samphanthawong in Bangkok, and Wat Or Noi in Nakhon Pathom.

Among the five arrested monks are Phra Phrom Dilok, the abbot of Wat Sam Phraya in Bangkok, and his secretary, Phra Atthakit Sophon. They were charged with temple fund embezzlement.

The monks and the laymen were charged with embezzling funds for a Buddhism school project and money laundering.

According to a report from the National Office of Buddhism, His Holiness the Supreme Patriarch has dismissed Phra Phrom Sitthi, Phra Phrom Methee and Phra Phrom Dilok as members of the Sangha Supreme Council (SSC). The SSC will meet on May 30 to consider whether to remove them from the governing posts in the clergy which requires a resolution from the meeting.

Temple staff said they last saw Phra Phrom Sitthi, Wat Sa Ket's abbot, about 4pm on Wednesday when he told them he would inspect construction work in the temple's compound.

Police were surprised to find a secret exit from the temple to Bamrung Muang Road, as detectives had not seen it before.

Immigration Bureau chief Pol Lt Gen Sutthipong Wongpin said Thursday the immigration bureau has now blacklisted Phra Phrom Sitthi and immigration checkpoints have been instructed to keep an eye out and prevent him from leaving the country.

Police said the abbot had 10 bank accounts and about 130 million baht had passed through them. All funds in the accounts were frozen.