The outside structure of Bang Sue Central Station, a new rail transport hub in Bangkok, is taking shape. It is expected to be the largest railway station in Southeast Asia.

He made the comments during a press visit to the station's construction site. Upon its scheduled completion next November, it will act as the Bang Sue-Rangsit Red Line's terminus.

According to Mr Kumpol, the megastation, spanning more than 240,000 sq m, and located near the Bang Sue junction on Thoet Damri road, will be a hub for high-speed rail links in addition to standard electric train lines and diesel trains.

"We have planned the station to take in all these high-speed railways. They will be located on a different platform floor to the Red Line's trains," he said.

"The station can only be fully opened once all these projects finish, but the section to service the Red Line will open when the route launches in October 2020."

Mr Kumpol said Bang Sue Central Station will have four floors, three of which will be located above ground. The underground floor will be reserved for the station's 1,624-vehicle parking lot.

The first floor will act as the station's concourse, with ticket vending machines for all railway routes using it as a terminus as well as leisure areas for passengers, Mr Kumpol said. This floor will be the only air-conditioned one, he added.

The second floor will be a large platform area comprising 12 tracks, he said. Eight of the tracks will be for long-distance routes operated by diesel trains, while the remaining four will belong to the SRT Red Line's electric commuter rail network. A platform for high-speed railways will be located on the station's topmost third floor.

Construction for the station is being overseen by the State Railway of Thailand (SRT), a state enterprise under the Transport Ministry which owns most of the land on and around the country's railways.

Valued at around 30 billion baht, the station is part of the Red Line's 80-billion-baht network.

SRT officials earlier said most of the routes departing and arriving at Hua Lamphong station -- also known as Bangkok station -- will gradually be transferred to Bang Sue while the former station will still remain operational.

Plans to turn part of Hua Lamphong into a railway museum once the transfer is complete have also been floated by railway authorities. 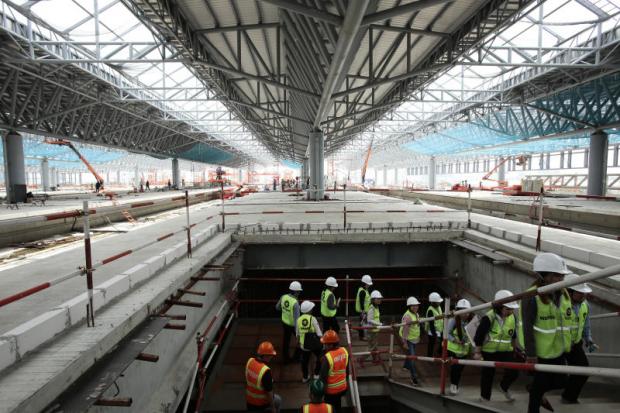 building up: Workers walk up a ramp to resume their jobs on the top level of Bang Sue Central Station, a new rail transport hub in Bangkok. Construction is almost 50% complete.