Forensic police arrive at the house of missing businesswoman Pinyada Paenkaew, 48, in Muang district of Songkhla on Saturday. (Photo by Assawin Pakkawan)

SONGKHLA: Police are looking for the ex-husband of a businesswoman who disappeared on May 23 and was believed to have been murdered, after charred bones were found in a marsh in Hat Yai.

The bones and other items found in the marshy area at Tha Nang Hom village on Friday have been sent to the forensic institute at Songklanagarind Hospital, where testing is expected to take about one week, said Pol Col Suebsakul Maneenuan, investigation chief at the Khohong police station.

Relatives who were taken to the scene on Friday said they believed the remains were those of Pinyada Paenchan.

If the tests confirmed the bones belonged to Pinyada, a warrant would be sought for the arrest of her ex-husband, said Pol Col Suebsakul. He said police investigators had obtained sufficient evidence, but declined to elaborate.

A team led by Pol Col Sakda Charoenkul, the Songkhla investigation chief, almost found the man on Friday but he managed to flee, possibly after learning from TV reports that police had found the bones, Thai media reported.

The officers found ashes, pieces of broken pavement, burned motorcycle tyres and a diamond-studded ring. Broken pieces of a charred human skull and other bones were found scattered over the area. Officers also found a false tooth and two motorcycle tyres that had not been burned nearby.

Pinyada, 48, was last seen on May 23 and relatives filed a missing person complaint with the Muang district police station in Songkhla on May 26.

Relatives told police that Pinyada ran a direct-sales business and sold life insurance and was quite wealthy. She had disappeared from her house on the night of May 23 along with her black Mercedes-Benz. Bloodstains were found in the house in Muang district, they said.

Pinyada and her husband were divorced. He had returned to live in her house but the couple no longer lived as husband and wife.

Forensic police on Saturday gathered evidence at the house of the businesswoman, which they believe was the murder scene.

A source on the investigation team said the woman and her ex-husband had had a quarrel over money before she vanished. 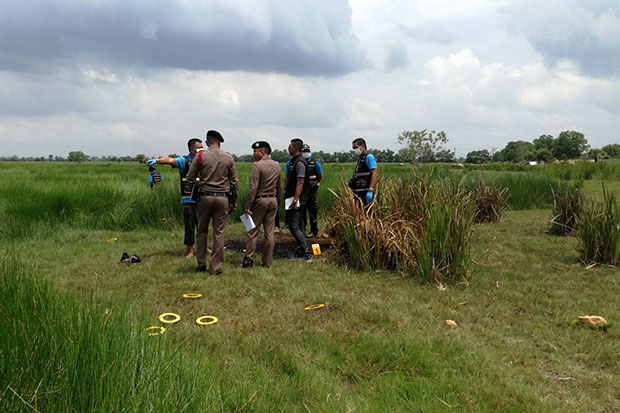 Forensic officials search a marsh in Hat Yai where burned human bones were found on Friday. Relatives say they are those of missing businesswoman Pinyada Paenchan. (Photo by Assawin Pakkawan) 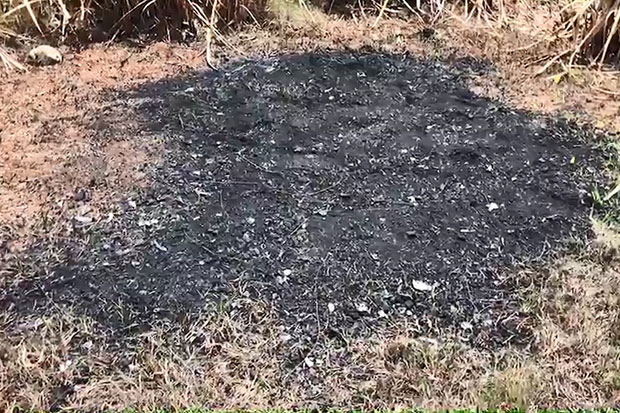