Trapping trash in nets or behind barriers near the mouths of rivers and klongs can prevent massive amounts of traffic from endangering marine life. (Photo via Stormwatersystems.com)

The death of a male short-finned pilot whale with a shocking number of plastic bags in its stomach in Songkhla province has sparked grave concerns about marine debris and the threat it poses to the marine ecological system.

The whale died on Friday, a few days after it ran aground in Chana district on May 28, and drew wide public attention to yet another case of a marine animal ingesting human refuse after 80 plastic bags, weighing about 8kg, were found in its stomach.

As a result, the Department of Marine and Coastal Resources is seizing on this opportunity to raise public awareness about marine litter, especially plastics, which are known to be responsible for the deaths of seabirds and marine mammals.

Jatuporn Buruspat, the department's director-general, said on Friday, which was also World Ocean Day, the agency will meet those in the plastic bag supply chain, including producers and users, to discuss how they can work to curb the amount of plastic that ends up in the sea.

He said more needs to be done to supplement proposed measures to reduce plastic waste which include limiting the use of plastic bags and placing traps at river mouths.

A study is under way into setting up buoys in Samut Songkram and Samut Prakan provinces to trap garbage before it flows into the sea, he said, adding that next year the department will buy waste-collecting vessels to clear the litter.

According to Mr Jatuporn, one of the challenges is to engage all state agencies concerned in dealing with mainland garbage. About 80% of the debris in the sea off Thailand comes from the mainland.

"The rubbish found in the stomach was not from Thailand alone, going by the product names on the plastic bags. The issue of marine debris needs collaboration from several countries in Asean and all stakeholders," he said.

The amount of plastics dumped into the sea stands at between 100,000-400,000 tonnes yearly, he said, noting that microplastics are also a cause for concern.

According to the Department of Pollution Control, Thailand generates 27.4 million tonnes of rubbish per year, of which 11.70 million tonnes is properly managed with 8.52 million tonnes being recycled. It is estimated that around 80% of marine debris comes from ineffectively managed mainland waste. 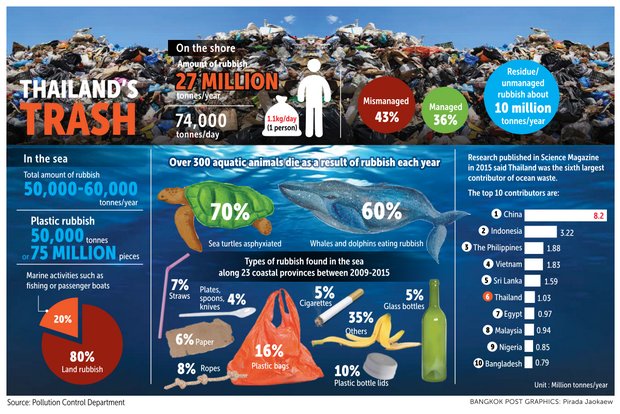 Marine conservationist Thon Thamrongnawasawat said Monday the whale's death added weight to the claim that Thailand is a major contributor of marine debris.

He said the world community is now watching Thailand after the man-made nature of the whale's death was reported worldwide. He also expressed concerns the country could face trade sanctions over "unfriendly practices towards marine life".

"The death of the whale only adds weight to the claim that we are the sixth-largest contributor of ocean waste. It means that all of what we have done in the past, especially campaigns concerning appropriate refusal disposal, have failed. We must do something different to limit single-use plastic. If we do nothing, we risk trade sanctions," he said.

Mr Thon, who is also deputy dean of Kasetsart University's Faculty of Fisheries, noted that the European Union has already proposed a ban on plastic straws and cutlery.

Mr Thon also urged department stores to come together and charge customers for plastic bags, in order to limit the use of the material.

A campaign by many department stores to reduce plastic bag use has had limited results, he said, adding that while the government initiatives to ban the dropping of cigarette butts on the beach and cap seals on drinking water bottles, its attempts to address plastic bags and straws have been inadequate.

To mark Tuesday's World Environment Day, under the theme "Beat Plastic Pollution: If You Can't Reuse It, Refuse It", the Department of Environmental Quality Promotion has picked Or Tor Kor market for a pilot project to encourage fresh markets to reduce plastic and foam packaging.

Or Tor Kor is Bangkok's highest-quality fruit and agricultural market in Chatuchak district.

THIS NEEDS TO BE EDITED BEFORE IT IS ENABLED!!! Frist time for Thailand held the global education conference "Forum for World Education 2022".