Wild elephants pillage a crop in tambon Tha Khanoon of Kanchanaburi's Thong Pha Phum district, where they have been raiding farms for the last month. (Photo by Piyarach Chongcharoen)

KANCHANABURI: An area in Thong Pha Phum district has finally been declared a disaster zone after being pillaged for the last month by wild elephants, with residents too scared to work in their raided fields.

Provincial governor Jeetakiat Phumsawad on Wednesday declared tambon Tha Khanoon a disaster zone, 29 days after a man was injured in one of the first of the series of raids on May 16.

On May 27, Thamsin Ratananupappot, 54, was attacked while he and other people from his village were trying to protect their crops. He died in hospital from his injuries.

Other people have also been injured trying to keep the marauding animals away from their property and crops.

The announcement releases emergency budget funds and other assistance to quickly help the affected villagers and employ measures to safeguard them.

Wild elephants were seen again in the tambon on Wednesday. Residents said they saw two or three elephants. The main group of about 50 - including cows with calves - was  seen at Ban Pa Un, Ban Pe and Ban Sao Hong in the same tambon.

Ban Prang Kasee School in the tambon instructs students in safety measures to employ when elephants raid their family homes. Local people and officials from Thong Pha Phum National Park secure the routes home for students after school finishes in the afternoon.

Volunteers in Tha Khanoon and park officials have been taking turns keeping watch for elephants   approaching fruit orchards and other crops, and use firecrackers to keep them away.

But not all farms were saved. (continues below) 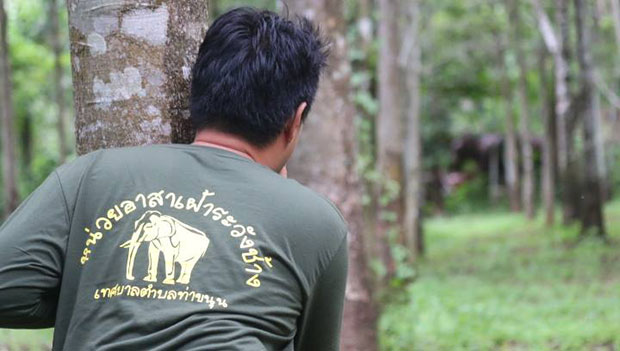 Sila Lamduan lost 4 rai of corn on Tuesday night. when three elephants paid him a visit. He had expected to get 40,000 baht from selling the crop in the next two weeks, he said.

Poo Soongsangaphum, 75, was among the first injured. He was hit by an elephant swiniging its trunk at him on May 16, and is still being treated at his house at Moo 3 in Tha Khanoon.

"I was digging up turmeric at the time. When I looked up, I saw the elephants were coming closer to me. I ran away but stumbled as I fled, and then I was attacked," he recalled.

He was treated and his damaged ribs taped up at Thong Pha Phum Hospital. Doctors finally allowed him to return home.

Panipak Wongpattanakit edged Spanish teenager Adriana Cerezo Iglesias to give Thailand its first Olympic gold medal in the women's taekwondo in the 49kg category on Saturday.

PRACHUAP KHIRI KHAN: A family was waken up late on Friday night by a familiar visitor — a jumbo who had broken into their kitchen a month ago in search of food.